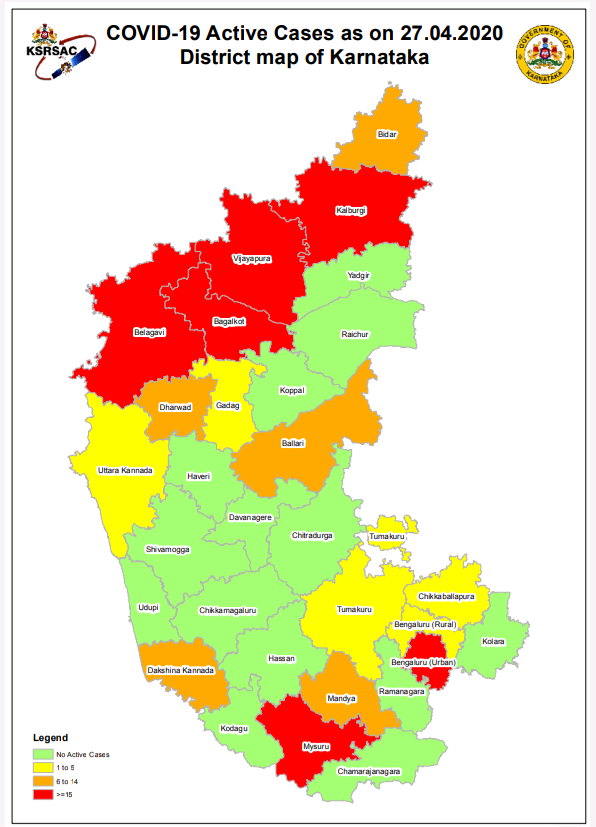 Bengaluru Urban is one of 6  high-alert red zones

There’s something to cheer about for Karnataka as 14 of the state’s 30 districts  have been declared green zones. Of the other districts, six, including Bengaluru Urban, come under the high-alert  red zone category.

The categorisation by colour is being done as per the active cases reported from the districts.

The red zones include Bengaluru Urban, Mysuru, Belagavi, Bagalkot, Vijayapura and Kalaburagi as these districts have reported more than 15 active positive cases.

IAS officer Munish Moudgil, who is Covid-19 incharge of the state war room in Bengaluru, and his team are constantly monitoring the number of cases in the state.

As per the health department’s media bulletin, Bengaluru has the most number of positive cases at 134, of which 71 are active cases, while Belagavi district stands second with 47 active cases, Mysuru has 46, Vijayapura 33, Kalaburagi 27 and Bagalkot 19 active cases.

Orange zone
Meanwhile, districts like Dakshina Kannada with 7 active cases, Mandya (14), Bellary (8), Bidar (6) and Dharwad (7)  have been placed in the orange zone which entails 6 to 14 active Covid-19 cases.

Yellow zone
Five districts fall under the yellow zone where only 1 to 5 active cases are reported. They are Bengaluru Rural (4), Tumkur (1), Chikkaballapur (5), Uttara Kannada (1) and Gadag (3).