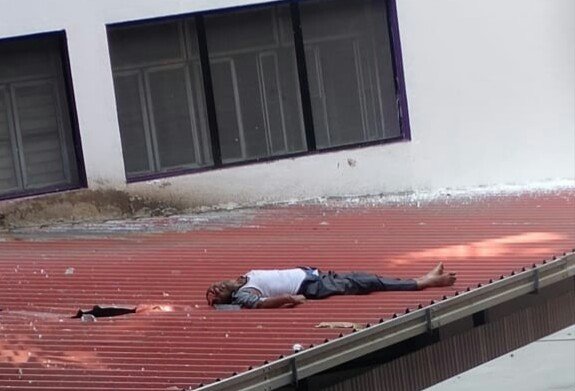 In an incident that shook the staff at the Covid-19 designated Victoria Hospital in Bengaluru, a 50-year old man who had tested positive for the virus committed suicide by jumping from the 6th floor of the hospital on Monday. The incident occurred around 8 am.

The deceased has been identified as patient 466 and was a case of SARI from Bengaluru.

The hospital staff claim they heard a huge sound, and when they came out they found the body of the patient on the ground. The man had developed respiratory problems, but  was not at a critical stage.

According to Dr CR Jayanthi, director and dean, Bangalore Medical College and Research Institute,  the opinion of psychiatrists was that the suicide could have been an impulsive decision by the patient, as he did not have any earlier symptoms of depression.

According to the police report, patient 466 was unmarried and was staying with his brother and other family members in Tilak Nagar.

As per Dr Jayanthi’s press note, the patient  was admitted on April 24. He had a history of chronic renal failure and was on dialysis for the past four years. On investigation, he was tested positive for hepatitis C.

The note goes on to say: “He was admitted in the ICU on the 6th floor of the trauma care centre of Victoria Hospital.

“He was dialysed on April 25 and was due for another dialysis on April 27.

“Apparently, he was alright the previous night. He had breakfast in the morning and requested for more. The doctor and nurse who were on duty at that time were attending to another critical patient in the ICU. By the time the second round of breakfast came, he slipped out of the ICU, opened the fire exit and took the fatal step by jumping off from the 6th floor staircase and fell on the roof of the patient attenders’ waiting area. He died on the spot at around 8.15 am.

“Immediately, the police were intimated and  the necessary steps were taken. The body was shifted after disinfection and with proper precautions to the mortuary, where an autopsy was done.The body was handed over to the relatives of the patient as per protocol for the final rites.”

Top ISRO scientist claims he was poisoned three years ago