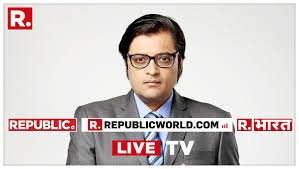 In a shockingly blatant move against the Republic Media Network on Friday, Mumbai Police has filed an FIR against the entire editorial team of the network, revealed Editor-in-Chief Arnab Goswami. All 1000 employees of the network have been booked by the Mumbai Police, including top editors of the Network. The Mumbai police has booked the case for a serious non-bailable offence for incitement to disaffection among members of the Police Force and defaming Mumbai Police – under sections 500 and 34 of IPC.

“For the first time in Indian history, an FIR has been filed against every editorial staff of a network. This means that 1000 employees of the Republic Media Network have been booked by the Mumbai police. They (Mumbai police) say ‘How can you air the Hansa report?’ and we said, ‘we will not reveal our sources’. Hence half an hour ago, Param Bir Singh instructed to file a case against all Republic editorial staff. The staff who are part of the production team, graphics team, promos team – we produce the news together. Sharad Pawar, Uddhav Thackeray, let there be a one-on-one now,” said Arnab.

Earlier in the day, Mumbai Police asked Republic Media Network CFO Sundaram to submit details of every transaction and detail of every journalist with the Network within 12 hours. The details sought by the team include costs of coffee vending machine, air-conditioning equipment, furniture, gardening, makeup, suits and even hairbrush, toilet paper, tissue papers, A4 paper and other stationery. Moreover, Param Bir Singh has reportedly brought in the Economics Offences Wing to probe Republic TV, which is also evident from Section 91 notice.

On Thursday, sources reported that 3-4 names have been discussed to allegedly replace the Mumbai police commissioner Param Bir Singh. Singh has requested more time from the government to allegedly find evidence against Republic TV, as per sources. This happened after the Maharashtra government withdrew its general consent given to the Central Bureau of Investigation to probe cases in the state, amid the central agency taking over a TRP case registered against unknown individuals, by the UP police. While the FIR was originally registered at the Hazratganj Police station in Lucknow reportedly on the complaint of an advertising company promoter, the Uttar Pradesh government recommended the transfer of the case to the CBI.

What is the alleged TRP scam?

Commissioner Param Bir Singh had held a press conference to share details of an alleged ‘TRP scam’ into which the police were probing – naming Republic TV and two Marathi channels – Fakht Marathi and Box Cinema. Mumbai police has arrested 10 people till date including Hansa research’s ex-employee Vishal Bhandari and ex-staffer Bomapalli Rao Mistri in connection with this case. While Singh named Republic TV, neither the FIR, remand copy nor the arrested individuals’ statements mention the channel, instead named India Today. As per Bhandari’s own confession to the BARC Vigilance team, a person named Vinay paid him Rs.5000 as commission for distributing Rs.1000 among 5 panel homes to ask them to watch India Today daily for 2 hours.

In spite of this, Mumbai police summoned Republic TV’s executive editor- Niranjan Narayanaswamy, Senior Executive Editor Abhishek Kapoor, CEO, COO, and senior members of the Republic Media Network’s Distribution team, asking them to reveal how they accessed the ‘Hansa report’. Recently, the state government too admitted to Bombay HC that Republic Media Network is not named in the FIR. The questioning has totalled to over 100 hours, and still continues, as Republic TV refuses to name its source.

Note: The entire story was first published on https://www.republicworld.com/