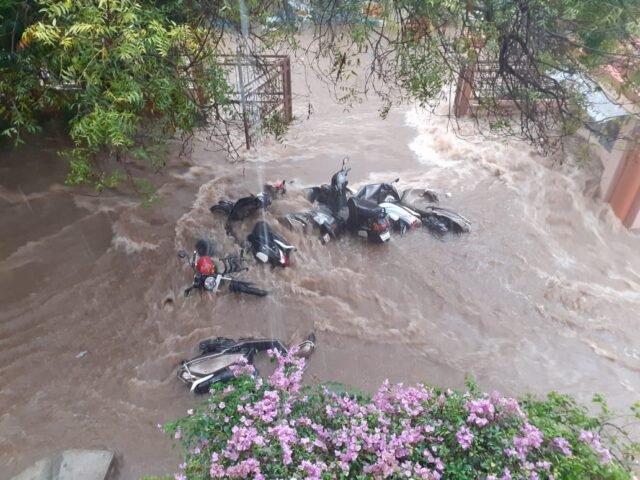 Dattatreya Layout in Hosakerehalli, Koramangala 4th Block among the worst-hit

Three hours of heavy rain on Friday evening left Bengaluru’s many low-lying areas submerged. The worst-hit was Dattatreya Layout in Hosakerehalli as the storm water drain there overflowed, resulting in water gushing onto the roads and into many houses. A video of a sinking car went viral on social media, but thankfully there were no casualties.

The civic chief later clarified that no lakes had been breached, and appealed to citizens to ignore false information spread on social media.

In Dattatreya Layout, rain water had submerged bikes and cars and had entered houses. Around 100 houses were affected and their residents were struggling to get out.

Speaking to TheBengaluruLive, BBMP’s Chief Engineer (SWD) BS Prahlad said south Bengaluru was badly affected. “I was at the spot with Minister R Ashoka and many cars, including our contractors’ cars, were submerged. The SWD was overflowing because its capacity is around 13 cusecs while around 20 cusecs of rain water entered it,” he said.

Prahlad said several roads near Lalbagh, Minerva Circle, Dattatreya Layout and Koramangala 4th Block were under 3 to 4 feet of water. He claimed that the rain water at Dattatreya Layout was flushed out within half an hour.