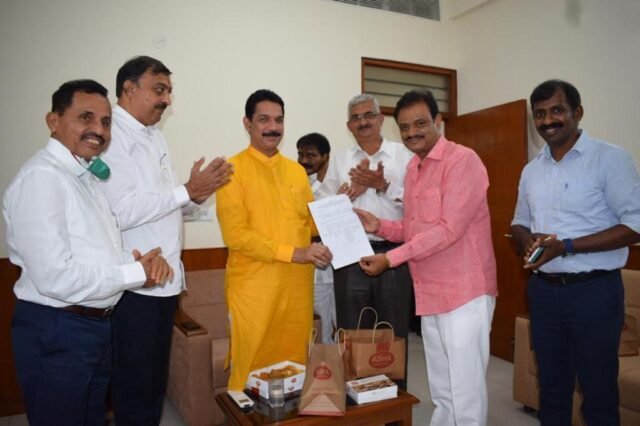 Congress defector N Muniratna is the ruling BJP’s choice for the November 3 assembly by-election from Raja Rajeshwari Nagar in Bengaluru. It was Muniratna’s resignation from the state assembly that formed the backdrop for the repeat election from RR Nagar. Twice elected from the same constituency since 2013, he resigned from the assembly last year along with 16 other Congress and JDS party-hoppers to help the BJP come to power in Karnataka. The seat fell vacant after he was subsequently disqualified under the anti-defection law last year.

From the opposition, the JDS has picked V Krishnamurthy as its candidate for the RR Nagar seat. According to party sources, Krishnamurthy is a leader from the Jnanabharathi ward in Bengaluru. He was chosen over the party’s city unit chief R Prakash and RR Nagar unit chief Bettaswamy Gowda.

“We had shortlisted 3 probables and ultimately decided on Krishnamurthy. His father was a loyal party worker, and Krishnamurthy is following in his footsteps. He will file his nomination tomorrow at around 10:30 am,” JDS legislature party leader and former CM HD Kumaraswamy told reporters. He predicted a three-cornered contest between the Congress, the BJP and the JDS in RR Nagar.

Asked for his response to the fact that the BJP has fielded his friend Muniratna from RR Nagar, Kumaraswamy said, “Both of us have come from the film world. We may have friendship in the film world, but not in politics. There is no need for people of the constituency to pay heed to any speculations.”

The JDS’s Bengaluru unit president R Prakash in a release said Krishnamurthy will file his nomination on Wednesday in the presence of the former CM.

From the Congress, Kusuma H, wife of IAS officer DK Ravi who died in March 2015, will contest the RR Nagar seat.

Meanwhile, Dr Rajesh Gowda will be the BJP candidate for the November 3 by-poll to the Sira assembly seat in Tumakuru district. The seat fell vacant following the death of JDS legislator B Sathyanarayana in August.

Gowda is the son of former Congress MP C P Mudalagiriyappa, who had represented the Chitradurga Lok Sabha constituency. Barely 10 days ago, Gowda, a radiologist by profession, was inducted into the BJP, giving rise to speculation that he would be fielded from Sira.

With an eye on garnering sympathy votes, the JDS has fielded Ammajamma, widow of Sathyanarayana, as the candidate from Sira. She is pitted against former minister TB Jayachandra of the Congress, who has represented the constituency in the past, and the BJP’s Gowda.

Both RR Nagar and Sira constituencies having a considerable Vokkaliga presence, the JDS’s traditional votebank, and the party is keen on winning the former and retaining the latter seat.

CRPF jawan beaten by cops, chained, made to sit on floor