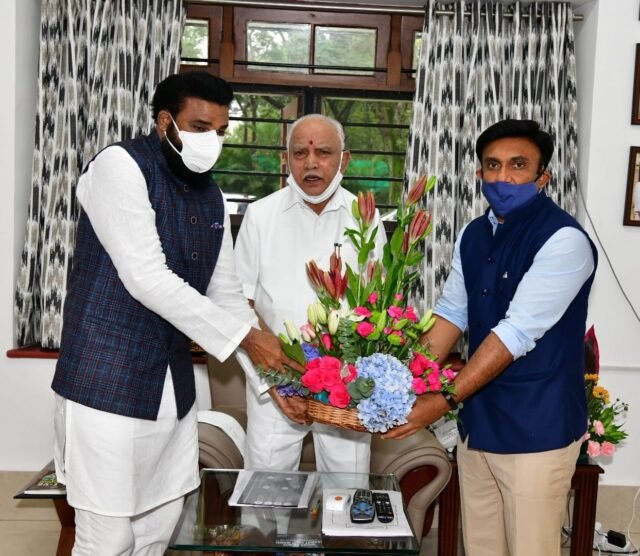 Karnataka Chief Minister B S Yediyurappa appeared to have brokered peace between his Cabinet colleagues B Sriramulu and K Sudhakar after it was widely reported that the rift between the two widened following a reshuffle of portfolios.

Sriramulu was said to be sulking after he was divested of the Health portfolio that was given to Sudhakar, who already had the charge of Medical Education. Sriramulu was appointed as the Social Welfare Minister.

Both Sriramulu and Sudhakar met Yediyurappa and a photo op followed.

“After our party came to power, I asked for the social welfare portfolio. But, I was made the health minister because I had done well in this portfolio in 2008,” Sriramulu told reporters.

“But now, the CM wants to help the SC/STs and the poor. So, very happily, I’m accepting the social welfare portfolio without any disgruntlement as being shown in the media,” he said.

Sriramulu downplayed the change in the portfolio and said it did not reflect poorly on his performance. “When Sudhakar started looking after Bengaluru, there were 1,000 daily (Covid-19) cases. It has touched nearly 5,000 today. That doesn’t mean he failed…

We’re all collectively trying to control the pandemic. When cases rose, we took precautionary measures – beds, oxygen, medicines and other necessary procurement. All of us, including the CM, worked beyond our strengths,” he said.

Sudhakar told reporters that Sriramulu got a “promotion” with the social welfare portfolio. “It’s not a demotion as is being made out,” he said. “There were issues with coordination at the ground level. While district health officers reported to the health minister, medical college directors reported to the medical education minister,” he pointed out and said both departments are seen as one in many Indian states. (Agency)