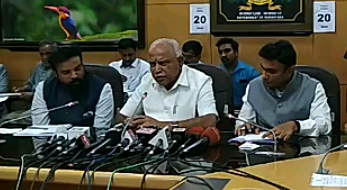 After a video conference with Prime Minister Narendra Modi, Yediyurappa said in a presser that this measure will be strictly implemented from Saturday evening.

“I am requesting all hotel owners not to misuse the crisis and to allow the parcel facility to individuals who depend on hotel food,” the CM said.

Yediyurappa added, “The restrictions on hotels will be strictly implemented in the jurisdiction of all the corporation areas in the state, including the BBMP area in Bengaluru.”

The CM was also firm on the government’s decision to shut pubs and bars as these establishments attract a large number of people. “Pubs and bar owners have to follow the government?s direction,” he said.

Yediyurappa said, “We held a proper discussion in the video conference with the Prime Minister. The Prime Minister briefed us about the steps taken by the Union government to curb the spread of the disease. He said the situation is alarming and the directions need to be strictly implemented.”

“We made a request to set up testing labs at Bellary, Hubli, Kalaburagi and Mangalore, which was accepted by the Prime Minister,” the CM added.

‘Hoardings at Hebbal flyover will be public loot’

Corona claims ‘record’ 57 lives in Karnataka, 29 of them in Bengaluru

Govt to aid of hostel quarantinees