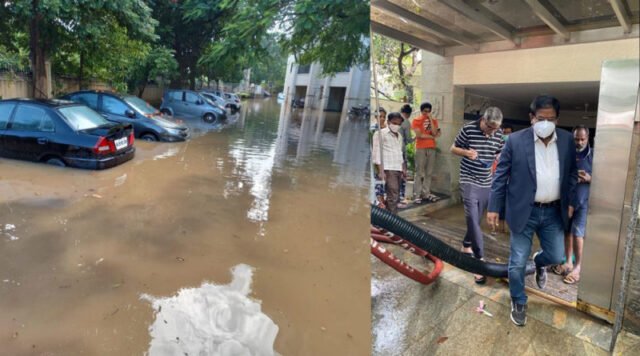 East Bengaluru was lashed by heavy overnight rains as it reported the highest 136 mm rainfall of the season.

Among the badly affected areas were Hebbal, Kushal Nagar, Hennur, Banaswadi, HBR Layout, Kempapura and Vayunandana Extension. Storm water drains overflowed and many apartments in these localities were flooded.

Speaking to TheBengaluruLive, Yelahanka Zone Chief Engineer Ranganath said the Kodigehalli railway underpass was flooded but “we can hardly do anything as the underpass was constructed by the Major Road Infrastructure wing and Indian Railways and has not been handed over to zonal officials.”

Ranganath said the IBM building inside Manyata Tech Park was flooded but the company authorities themselves drained out the water.

Storm Water Drain Chief Engineer BS Prahlad said the IBM building was not occupied and was still under construction. The building’s four basement floors were flooded.

In one incident, the driver of a luxury car struggled to move it from a spot where it got stuck near the railway track near Shivananda Circle. A road leading to Sahakar Nagar was waterlogged. In Horamavu, flood water came into houses. In some areas of Horamavu and Sai Layout, electronic appliances in many houses were damaged.

Despite several calls to BBMP helplines, there was hardly any response.