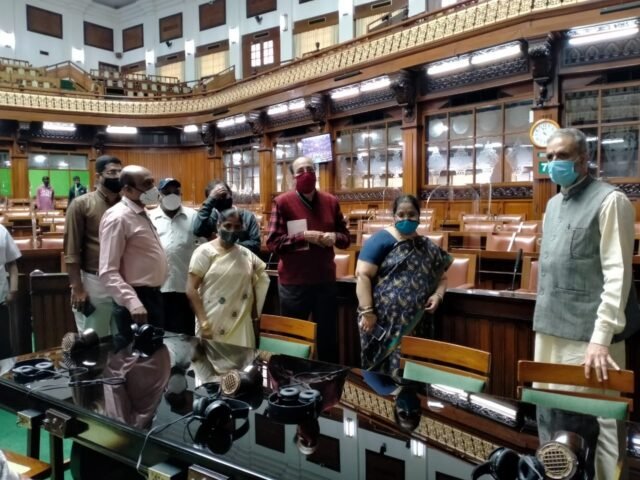 The 10 day Winter Session of the Karnataka Legislative Assembly beginning Monday, in the backdrop of Covid-19 threat, is likely to be stormy as opposition parties are gearing up to attack the ruling BJP government headed by Chief Minister BS Yediyurappa on its alleged lapses in handling Corona, flood-affected along with various other issues.

Among other issues, the ruling BJP State Executive which met yesterday at Belagavi has passed resolutions to move Bills against religious conversion, which they refer as ‘Love Jihad’ and cow slaughter in the session.

The Winter Session, which was usually held in Suvarna Vikas Soudha (SVS) at Belagavi, was scheduled to be held in State Capital at Vidhana Soudha, the State Secretariat skipping Belagavi bordering Maharashtra and Goa. It was present Chief Minister B S Yediyurappa who was responsible for constructing SVS who had determined to hold the Winter Session every year in Belagavi to prove to neighbouring Maharashtra State that Karnataka has not neglected the interests of Marathi speaking people.

Taking strong exception to the skipping of SVS this year, Karnataka Pradesh Congress Committee (KPCC) State President D K Shivakumar and Opposition Leader in the Legislative Assembly Siddaramaiah are gearing up to attack the ruling party. The opposition parties were of the opinion that if the State government is not holding the Session and utilising then what far about Rs 430 Crore was spent for construction of SVS.

Adding to Opposition’s weapon was Chief Minister Yediyurappa announcing the formation of Maratha Development Authority allegedly ignoring the interests of Kannadigas. However, the Chief Minister defended setting up the Authority stating that there are Marathi speaking people in Karnataka and it is the duty of the State government to protect their interests and development.

The setting up of Maratha Development Authority attracted widespread criticism from various corners and pro-Kannada organisations had given a call for ‘Karnataka Bandh’ on December 5 demanding the Chief Minister to withdraw its decision. The Bandh, however, attracted a lukewarm response and passed off peacefully. It was alleged that the Authority was formed to woo the votes of Marathi speaking people in the forthcoming Panchayat election.

The ruling BJP has also decided to move a bill banning cow slaughter in the State.

Other issues including alleged failure of the State and Centre in coming to the rescue of farmers and people affected by floods, corruption in the purchase of Covid equipment etc. (Agency)

Officer who ‘locked’ Mantri Mall is back in BBMP

What happens when your carryon is over the limit