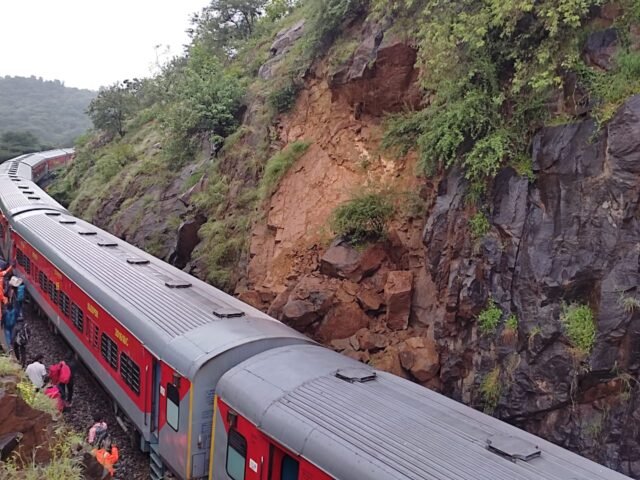 Seven coaches of a Bengaluru-bound train derailed near Dharmapuri in Tamil Nadu on Friday after boulders fell on it but all the 2,000-odd passengers were safe and nobody was injured in the incident, the Southern Railway said here.
The Kannur-Bengaluru Express had left from the former, in Kerala, at 6.05 PM on Thursday.

“On date (Nov 12), at about 3:50 AM, due to sudden falling of boulders on the running train, coaches of Train No 07390 Kannur-Bengaluru Express derailed between Toppuru – Sivadi of (Bengaluru–Salem Section), Bengaluru Division,” an official release here said.

“All 2,348 Passengers on board are safe. No casualty/injury reported,” it added.

A team of officials including Divisional Railway Manager (DRM) Bengaluru, Shyam Singh, along with a doctor, rushed to the spot immediately with Accident Relief Train (ART) and Medical Equipment Van.

The Chief Public Relations Officer of South Western Railway Aneesh Hegde, who had initially said five coaches have derailed, later clarified that there were seven coaches and not five.

He also said that a team led by DRM Salem has also proceeded to the spot along with ART from Erode.

The unaffected rear portion of six coaches, along with passengers, was cleared towards Toppuru and further to Salem. The restoration work is in progress. Boulders were being removed with earthmoving equipment, the official said.

Buses have been arranged for transporting passengers to Bengaluru, the officials said, adding tea and snacks were provided to them.