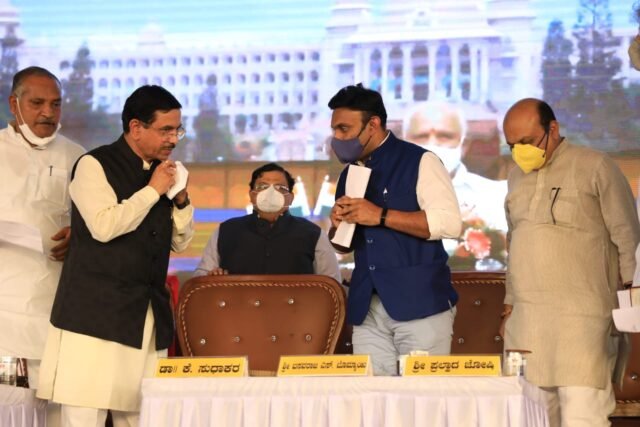 Union Minister for Parliamentary Affairs and Coal Pralhad Joshi on Friday declared that the Centre is planning to establish an All India Institute of Medical Sciences (AIIMS) in every state in order to strengthen the Medical system in the country.

Talking as the Chief Guest at a Foundation Stone Laying function for a Medical College Complex held in Haveri, Joshi said that as part of Prime Minister Narendra Modi’s Public health mission, Permission for 157 New Medical Colleges have been granted and the proposed New Medical College in Haveri is a Deepavali Gift for the people of Haveri District.

Joshi said that the Ayushman scheme launched by the Center to ensure good health for everyone and provide Medicine for every one has become one of the World’s biggest Health Scheme benefiting so far more than Ten Crore people which indicates the importance that the Center has given for the welfare of the people. He said in order to control the Covid-19 Pandemic, the Center has so far established 2030 (Two thousand and thirty) Laboratories all over the Country and Seven to Eight Lakh people are being tested every day for the Covid 19 Pandemic.

He also said that Proposals are being completed to achieve India Tuberculosis (TB) Free Country by the year 2025. The Government has taken several steps to help people to get Medical Treatment for replacement of Knee-caps, Kidney problems and Heart diseases at a cheaper rate, he added.

2 deaths on Sunday, 1 in Bengaluru