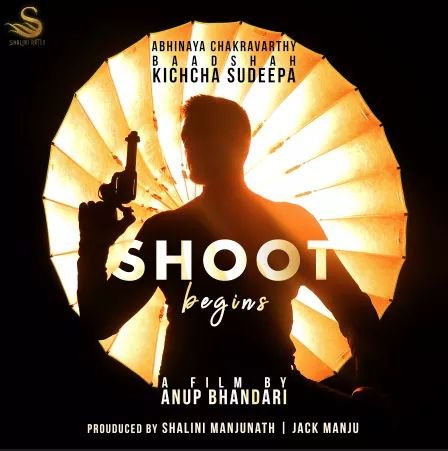 For fans eagerly awaiting news of Kiccha Sudeep’s next film, here it is. Shooting for ‘Phantom’, directed by Anup Bhandari, gets off on Monday.

Sudeep was last seen on the big screen in ‘Pailwaan’. Then there is ‘Kotigobba 3’, which is yet to hit the screens. Now, the star himself has announced the shoot for ‘Phantom’.

The poster released for the shoot is brilliantly designed and takes after Bond! It is an indication of the public craze over the movie and the character played by Sudeep in his latest avatar. Future photos of the shoot are sure to trend on social media.

On Sunday, the actor tweeted, “It was a fabulous Photo and Promo shoot for Phantom at Kanteerava studio. Filming starts tomorrow. Team is excited and so am I. Best wishes to all the actors, tech team and the production house.”

The director of ‘Phantom’, Anup Bhandari, tweeted, “Tomorrow it is! After a unique photo and promo shoot, excited to see Kiccha Sudeep sir unleash the beast for Phantom. Thanks to Shalini Arts and Jack Manjunath sir for providing us with everything and Priya ma’am for her continued support.”

The movie is produced by Shalini Maniunath, wife of producer and distributor Jack Manjunath. This is Anup Bhandari’s third directorial effort and the first time he will be directing another actor. His last two movies were directed for his brother.

‘M’ In BMTC Stands For Misbehaviour!