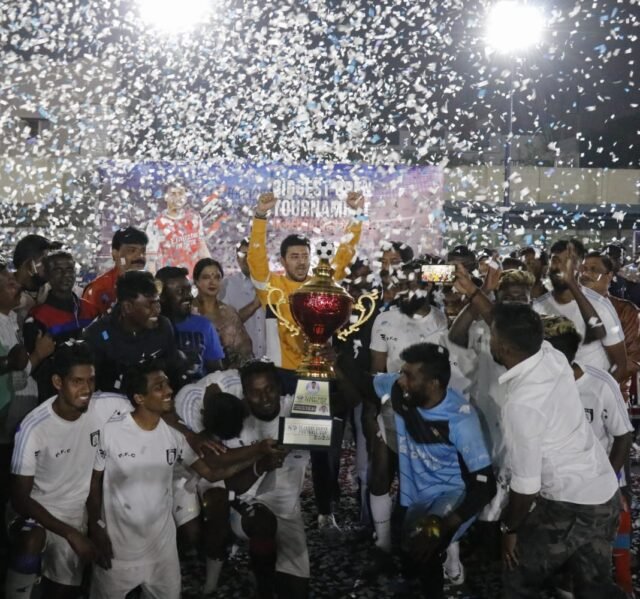 Prabha 7s defeated Jeevan Blues FC 4-2 via penalties (after a 2-2 draw) at Kickstart FC to emerge the champions of the Tejasvi Surya Football Cup in the professionals’ category on Sunday.

Vishnu of Jeevan Blues scored one only for Karthick to equalize soon after. Narender gave Jeevan Blues the lead again but Karthick ensured the teams were locked 2-2 at full time.

In the shootout, Jeevan Blues secured the victory in a tight contest.

The event marked the conclusion of Bengaluru South’s biggest sporting extravaganza, where 244 matches were held for 2 teams (31 among them professional teams playing in a separate category) in 3 days with the support of 8 turfs and 150 volunteers.

In the open category tournament of the Tejasvi Surya Football Cup, Cosmos took on La Masia in the final. La Masia took the win in the second sudden death.

“We planned this event to engage all the youngsters of Bengaluru South – be it amateur or professional players – and encourage them to play a sport,” Tejasvi Surya, MP Bengaluru South, said. “But in the course of this event, we saw that the entire constituency’s citizens have come together to host this. Be it the minimum of 8 members in each team, the dedicated set of volunteers in each of the venues, the turf owners or the sponsors, everyone has dedicatedly worked to make this tournament a success.”

To organise the tournament, the Office of the MP tied up with a total of nine venues. The tournament among professionals was held at Kickstart FC. The open tournament, where any Indian above the age of 16 could register, was held FITON Sports (Gottigere), Rush Arena (Rajajinagar), SportsRush (Siddapura), Tiger 5 (Kanakapura Road), TurfPark (Koramanagala and HSR Layout), Golden Leg (HSR Layout) and Dribble Arena (Uttarahalli). The event even had an exclusive category for women teams, in which JUFC beat Sai Sports Academy to claim the prize.

“Football’s popularity is on the rise in Bengaluru and the constituency of Bengaluru South is not lagging behind. Bengaluru South citizens, be it youngsters or even middle-aged, have also shown keen interest in playing and organising a tournament for football here. The fact that we held 192 matches in a single day across 8 venues speaks about the mammoth scale of the tournament and we hope to organise more such events for football and other sports,” said Aravind Suchindran, the tournament director.

Referees recognised by the Karnataka State Football Association officiated the tournament. Outstation teams from Nilgiris, Coimbatore, Mysuru, Channapatna and Mandya featured in the professionals’ category with all of them being provided boarding and lodging by the organisers. The overall prize money of the Tejasvi Surya Football Cup was around Rs 3.6 lakh. Even individual players were rewarded for their performance.

“It’s no joke to organise a football tournament of this scale – that too without charging any entry fee for the teams,” Abhishek M, owner of FITON Sports, said.

“We turfs have been organising tournaments but none of us were able to rope in these many teams, sponsors and volunteers. This Cup was special because competitive turfs worked together to contribute to organising this event. We hope to see more such events in the future.” Rajson’s Pharmaceuticals Pvt Ltd and Sapna Pharmaceuticals were the main sponsors of the Tejasvi Surya Football Cup.

Nutrition brand Fast&Up India were the platinum sponsors. The State Bank of India and Ullas Agarbathi were the Gold Sponsors. The co-sponsors of the event were Pure-O-Natural Bengaluru, GoChe and House of Stori, while the associate sponsors were Heydoc, Stoned Monkey, Popz Kitchen, Diamond Mantra and Akhaada Yoga.