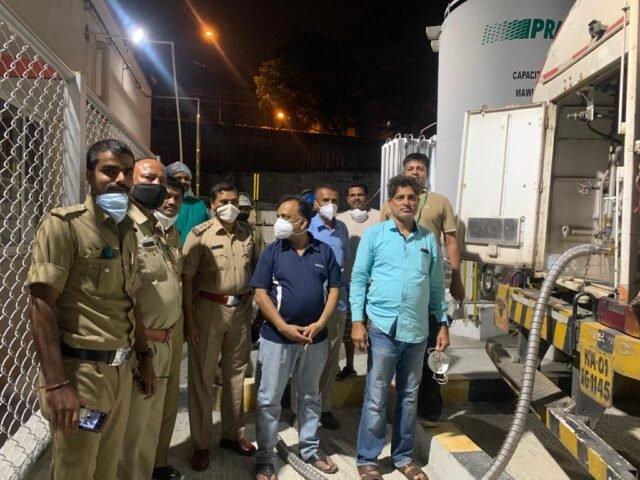 DyCM Ashwath Narayan takes the lead, stays up till 4.30 am on Thursday to ensure emergency oxygen reaches hospital

A repeat of the recent Chamarajanagar tragedy, where 23 patients died reportedly due to a shortage of oxygen, was averted in the nick of time at KC General Hospital in Malleswaram early on Thursday morning. Emergency supplies of oxygen reached the hospital just as its storage tank had nearly emptied. Credit for saving the day goes to the timely action taken by Deputy Chief Minister Dr CN Ashwath Narayan and the alertness of Dr Renuka Prasad, who was monitoring the oxygen supply vertical in the hospital.

KC General Hospital has an oxygen storage tank of 6 tonnes capacity and by late night on Wednesday barely 0.5 tonnes was remaining. About 200 patients were being treated in oxygenated beds. The oxygen supply, which was supposed to come from ProxAir, a private company in Ballari, did not arrive at the expected time, causing anxious moments amongst the hospital staff. It was then that Dr Renuka Prasad apprised the DyCM of the dire situation.

Immediately, Narayan, who is also MLA from Malleswaram, identified another private supplier, Universal Company, located in Dabaspete on the Bengaluru-Pune National Highway (NH 48) at a distance of about 50 km from the city. He ordered the company to provide 20 jumbo cylinders. The company responded positively and agreed to send oxygen in a tanker to the hospital.

In the meantime, Narayan, who is also state Covid task force head, alerted the traffic police to ensure that there were no traffic obstructions from Dabaspete to Malleswaram. The hospital’s oxygen tank was refilled to 5.5 tonnes — about 90% of its storage capacity — by 5 am on Thursday. Had there been a further delay or had the oxygen not arrived, many patients’ lives would have been at grave risk.

The staff of the hospital also deserve credit for monitoring the oxygen requirements of the patients throughout the night. Till the oxygen replenishment arrived, they managed with the limited oxygen available.

During the entire tension-filled period, the DyCM stayed up till 4.30 am on Thursday morning. Besides, Narayan’s earlier decision to assign the monitoring of each section of the hospital to a different medical officer was vindicated during the crisis. The DyCM later commended the alertness and dedication of the hospital staff.

IT among industries that can open with ‘best practices’ self-declaration