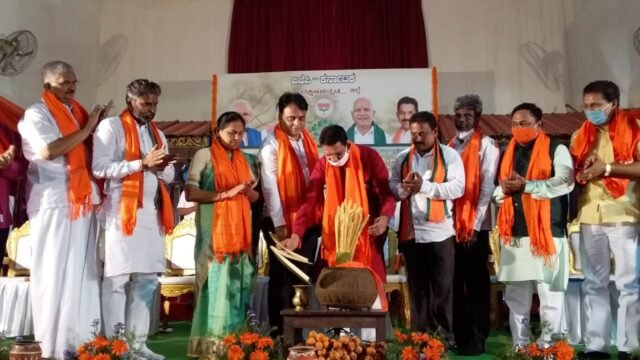 The BJP’s Karnataka unit president Nalin Kumar Kateel on Saturday reaffirmed that there has been no talks in any of the party forums on leadership change in the state, as speculation about the high command mulling over replacing Chief Minister B S Yediyurappa refuses to die down.

Speaking to reporters in Mangaluru, he questioned whether discussions have taken place in this regard and at what level.

“Who has raised the issue of leadership change? Who has questioned it? Has our national president or national office bearers or core committee members or our legislators have spoken in this regard?” he asked.

There have been rumours in some quarters in recent times that the BJP is weighing the option of leadership change in Karnataka considering the age of Yediyurappa, who is 77.

The state BJP has repeatedly rejected such speculations, but some within the party like senior MLA Basanagouda Patil Yatnal have openly talked about his replacement.

The recent move by Yediyurappa like-recommending inclusion of the Veerashaiva-Lingayats community as OBC under the central list, which has been deferred, is being seen by many within BJP circles as a move by the CM to further consolidate his position as the leader of the community considered as BJP”s core vote bank, amid such speculations.

On cabinet expansion or reshuffle, Kateel said the Chief Minister along with national leaders will decide on who should be in the cabinet and all party legislators will abide by it.

The statement from the party president and the DCM has come amid some aspirants openly expressing their resentment about the delay in the cabinet exercise.

Ministerial aspirant and MLC MTB Nagaraj expressed unhappiness about delay in his induction into the cabinet.

“It has been six months since we became MLC. Chief Minister has been saying that induction will happen, but the delay has caused some resentment naturally,” he said.

Other BJP MLCs A H Vishwanath and R Shankar, who along with Nagaraj had rebelled against the Congress-JD(S) coalition government and faced disqualification, which helped the BJP come to power, too have expressed similar sentiments.

They too have asked Yediyurappa to keep up the promise by making them ministers in return for their “sacrifice”.

As per the agreement, Yediyurappa has already inducted 10 rebels into the cabinet after they won subsequent bypolls on the BJP ticket.

Now the the three MLCs along with newly elected Rajarajeshwari Nagar BJP MLA Muniratha (also a rebel) are now waiting for their turn.

With cabinet expansion delaying, a section of this group had met at a hotel last night and held discussions.

They are said to be miffed about one among them, Minister Ramesh Jarkiholi, who has made repeated visits to the high command lobbying for the induction of MLC C P Yogeshwar, who is not from the group.

Yediyurappa on Friday told reporters that he has spoken to Union Home Minister Amit Shah on the cabinet expansion, and the central leadership will convey their decision soon, and that the exercise may take place in two- three days.

The cabinet expansion or reshuffle is expected to be a tightrope walk for the Chief Minister, considering that there are too many aspirants, from the party old guard too along with Congress-JD(S) rebels who are now BJP legislators.

The cabinet currently has 27 members, and seven berths are still vacant.PTI

Yediyurappa allocates portfolios to new Ministers, effects changes for some

Now, get orchard-fresh mangoes via Flipkart