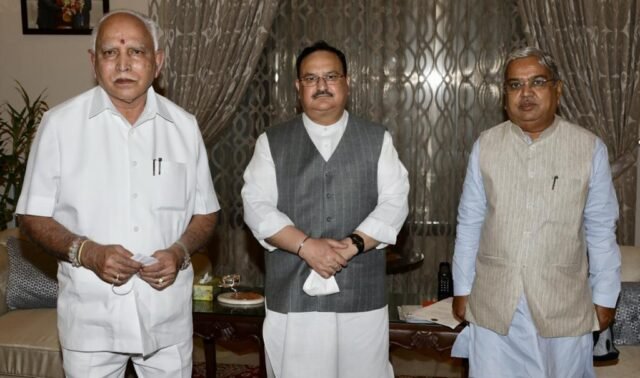 Savaal kursi ka: Will Yediyurappa’s age go against him, or will his votebank hold prevail?

Speculation is rife that Chief Minister BS Yediyurappa will have to step down and make way for Deputy Chief Minister Govind M Karjol to take over the reins of the government. It is also being rumoured that Yediyurappa’s younger son BY Vijayendra will be made Deputy Chief Minister. This latest buzz in political circles has been triggered by the current visit to New Delhi of several cabinet ministers to attend the official installation of fellow-Karnataka BJP man CT Ravi as national secretary of the party. Sources have hinted to theBengalurulive that this development has given the ministers an opportunity to play ‘Monopoly’ by pressing their own cases with BJP national president JP Nadda and other senior party brass.

These sources have also noted that the intention of the central BJP leadership in creating  three Deputy Chief Minister’s posts, currently occupied by Dr CN Ashwath Narayan, Govind Karjol and Laxman Savadi, was to create a smooth pathway to the Chief Minister’s post as and when the Delhi brass decides.

As far as Yediyurappa is concerned, it has never been a cakewalk for him to hold on to the CM’s post. In the past too, he was forced to step down after corruption charges were made against him. From 2008 to 2013, DV Sadananda Gowda and Jagadish Shettar were appointed CMs in succession to complete the five-year tenure of the BJP government.

Besides, Yediyurappa’s age – he is now 77 – could also come in handy for the Delhi brass to ask him to step down.  However, on the flip side, he has shown his hold over the electorate by leading the party to victory in the recent RR Nagar and Sira assembly by-polls. There is thus an equal chance that he won’t be touched, as reflected by recent affirmations from state ministers and other high-ranking state BJP functionaries that the CM will complete his tenure.

At another level, there is talk that the party does not want to unsettle the Lingayat-Veerashaiva vote bank which has played a major role in the formation of the BJP government in Karnataka. Hence, the speculation that Yediyurappa’s son Vijayendra will be elevated to Deputy Chief Minister’s post as a balancing act while Govind Karjol will take over as Chief Minister.

Sources also say that the central BJP leadership has given the green signal for expansion of the cabinet and reshuffle of portfolios, especially the major ones.  In a nutshell, the question of the day that looms over the state’s political horizon, a la Hamlet, is: Will Yediyurappa remain CM or not?

Opposition to approach HC if BBMP polls are postponed