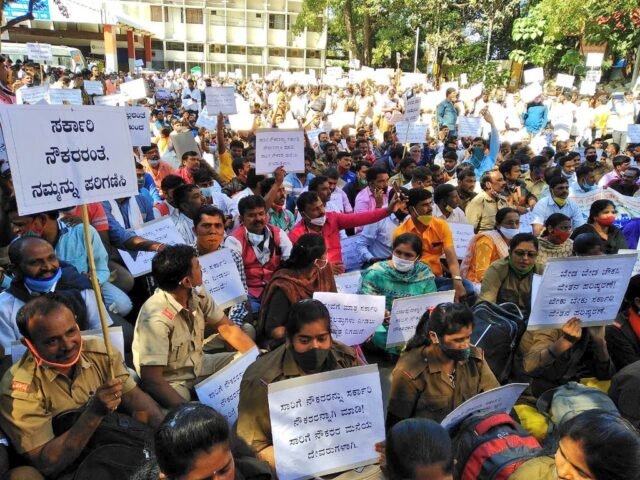 Travelling public were put to face hardship as buses were off the road since Karnataka State Road Transport Corporation (KSRTC) employees declined to move the bus even as the Home Minister ruled out the possibility of imposing ESMA against agitating workers.

The agitators, who are demanding to consider them as Government servants, declined to give up their agitation for the third day in Bengaluru and second day in North Karnataka. Drivers and conductors with Bangalore Metropolitan Transport Corporation and KSRTC refused to drive the bus.

Chief Minister B S Yediyurappa appealed to the agitating workers to resume work and invited them for talks.

According to an official statement on Saturday, Yediyurappa has stated that he had already directed Minister Laxman Savadi to resolve the issue. “It is unfortunate that the staff working in transport corporations are protesting by disrupting passenger services. The strike is affecting traveling public across the state,” he added.

Further, alleging that the strike was instigated by vested interests, Yediyurappa pinned the blame on farmers’ leader Kodihalli Chandrashekhar who has been a prominent face of the strike. “He has instigated a section of transport employees to protest which has, in turn, led to stone pelting on some KSRTC and BMTC buses. He is responsible for causing loss to public property,” Yediyurappa stated.

Meanwhile, a NWKRTC employee who was on strike died of heart attack at his home in Belagavi on Saturday. Datta Mandolkar, 58, collapsed and died.

He had returned after attending overnight strike and was planning to return to the bus stand for the second day of strike. His family members have sought compensation from the government for his death.

NWKRTC workers continued their strike for the second day on Saturday. They spent the night cooking dinner and slept on mats and plastic sheets spread out in the bus stand.

They protested by begging money from passers-by, telling them that the government has not paid their salaries for the last six month. They shouted slogans against Minister Laxman Savadi , Workers have been demanding that they be treated as Transport Department employees and those who died during the lockdown be treated as corona warriors.

The KSRTC managed to operate only four buses to Mysuru and majority of buses remained off the road. “The Bengaluru division could operate only a few services out of 127 schedules till 10 a.m. The services were hit even in other divisions barring Mangaluru division. In districts such as Chitradugra, Davangere one or two buses were operated in the morning hours,” said a KSRTC official.

Citizens are relying on autos, taxis and private buses for their commute.

Kodihalli Chandrashekar, President of Workers Federation speaking to newsmen alleged that the State government has not invited them for talks. “Employees will continue to participate in the strike.”

He said that from tomorrow the agitation will be intensified by resorting to hunger strike in front of Gandhi statue in all the four divisions of the KSRTC.

The agitation has badly affected traveling public even in Dakshina Kannada district.

The KSRTC employees are also demanding a compensation of Rs 30 lakh to the families of transport workers who died during Covid duty. The strike also continued in Kalyana Karnataka divisions.

BMTC Managing Director Shikha said on Saturday that the agitating workers should resume their duties by evening if they fail to return necessary action will be initiated tomorrow.

Speaking to newsmen, she said the strike affected the general public at large and the BMTC was always ready for the talks and let them come to office to sort out their demands. She also appealed to the workers to resume for the duty and cooperate. (Agency)

Warning to villagers after 75,000 cusecs released from KRS