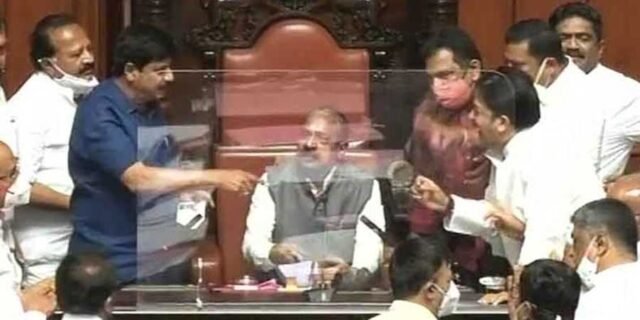 The one-day special session of the Karnataka Legislative Council, convened to dislodge Chairman of the house Pratap Chandra Shetty, witnessed unprecedented scenes as the opposition Congress and the ruling BJP members indulged in fist fighting and pushing each other amidst the din.

The house had witnessed chaos when both the ruling BJP and the Opposition Congress members shouted at each other, indulged in fist fight, and demonstrated their muscle powers to overpower each other.

The Chairman, Pratapchandra Shetty, who had managed to occupy the Chair and immediately adjourned the house sine die.

Earlier in the day, the Chairman had rejected the notice of no-confidence motion seeking to dislodge from the seat, and had listed businesses of the house, which could be take up on Tuesday, which included, Question Hour, tabling of the anti-cow slaughter bill, and other related issues in the house.

Karnataka Panchayath Raj Minister K S Eshwarappa, had condemned the incident and said that “such kind of misconduct the house had not witnessed in its history of over 120 years of the house”.

It may be recalled that the state government had convened one-day session of the Council, seeking to table the anti-cow slaughter bill as well as no-confidence motion against the Chairman, Pratapchandra Shetty, who was a Congressman.

The Chairman, had earlier adjourned the House sine die, after ignoring to take up the no-confidence motion stating that that the notice was not in order. (UNI)

Section 144 Near Vidhana Soudha From March 2