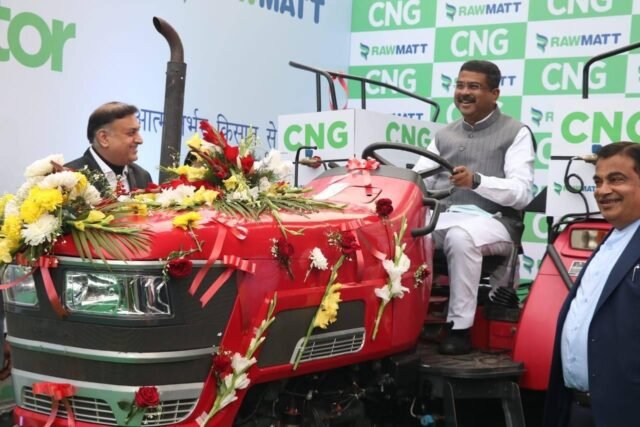 Union Minister for Road Transport and Highways Nitin Gadkari has said that the government is working towards achieving increased income for farmers by lowering costs, and creating job opportunities in rural India.

Launching India’s first-ever diesel tractor converted to CNG, here today in the presence of Union Ministers Dharmendra Pradhan, Parshottam Rupala and Gen (Retd) Dr V K Singh, Shri Gadkari said, the most important benefit for the farmer will be to save more than one lakh rupees annually on fuel costs, which will help them to improve their livelihood.

The Minister said, CNG is a Clean Fuel, as it has the lowest content of carbon and other pollutants. It is economical as it has zero lead and is non-corrosive, non-dilutive and non-contaminating which helps in increasing the life of the engine and it requires less regular maintenance.

It is cheaper as CNG prices are far more consistent than fluctuating Petrol prices; also the average mileage of CNG vehicles is better than that of Diesel/Petrol driven vehicles. It is safer as CNG tanks come with a tight seal, which reduces the possibility of explosion while refuelling or in the event of a spill.

Gadkari said it is also part of Waste to Wealth movement, as stubble (Parali) can be used as a raw material for producing Bio-CNG which will help the farmers to earn more. Replying to questions on when CNG-run tractors will be available in India, the Minister said the diesel-converted CNG tractor, done jointly by Rawmatt Techno Solutions and Tomasetto Achille India, is currently an experimental pilot project, and this would happen in due course.

PNG and CNG supply will reach the 85-90 percent of the population in a few years. Shri Pradhan said that an alternative energy model based on clean sources is developing, and this will help in meeting the country’s commitment to COP 21 for reduction in pollution.

He said that 5000 CBG plants will be set up under the SATAT programme. There is an estimate that about 600 million metric tonnes of biomass from farms, forests and cities is available. Conversion of the waste to wealth will not only empower the farmers by providing additional income to them, but also help in reducing pollution, improving health outcomes and making the cities clean. He assured that a decision will be taken soon for allowing the retail oulets to sell the CBG. The minister said that 8.5% ethanol blending in petrol has been achieved and soon India will be number one country in ethanol blending.

The Karnataka-based MRN group owned by Mines & Geology minister Murugesh R Nirani, which is involved in sugar production and other agro-based business has signed a pact with Rawmatt Industries Pvt Ltd to convert diesel tractors into CNG tractors. The Leafinity Bioenergy Private Ltd which is part of the MRN group will convert 500 diesel tractors into CNG engine tractors in the first phase and in addition 1,500 tractors will be converted into CNG tractors by 2023. The agreement was reached between Rawmatt and Vijay Nirani, managing director of MRN Group during the launch of CNG tractor in New Delhi.

The cost of converting the diesel engine tractor into CNG tractor is around Rs 2 lakh to 2.5 lakh and the farmers are assured of getting their expenditure back in reasonable time. This engine will have 10 to 15 years of life. The MRN group will set up CNG dispensation stations which includes engine conversion set up and CNG gas station at Bagalkote District very soon and extend all the help to the farmers in transforming their livelihood with this initiative.

The launch of first CNG tractor in the country is a crucial step towards realizing Honourable Prime Minister Shri Narendra Modi’s dream of making India self-reliant in all the sectors with his ‘Atmanirbhar Bharat’ campaign. The Prime Minister, who has been emphasizing on improving the lives and economic condition of our farmers, took several measures to double their income and get good price for their produce. The transformation of diesel tractors into CNG tractors is an important step towards empowering our farmers.

With Inputs from PIB