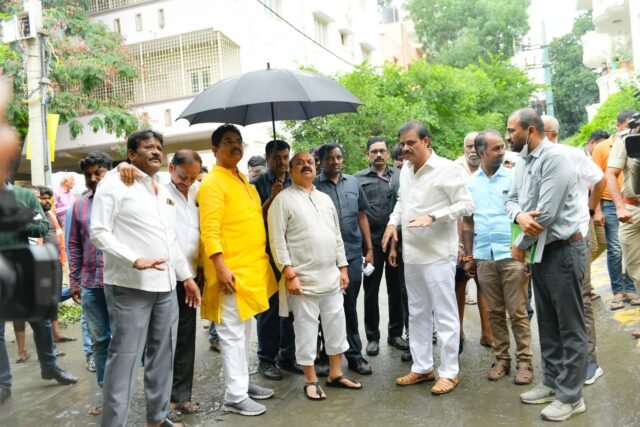 The Chief Minister was interacting with media persons after visiting the rain-affected areas of Hosakerehalli and Rajarajeshwari Nagar. “Low lying areas are flooded in Bengaluru during heavy rains as the water flows from high areas to low lying areas due to the topography of the city. In many places, houses have been built along the Rajakaluves (key links that connect one lake to another). As a result, water cannot flow smoothly. Action has been taken to drain out water from houses which have been flooded. The clogged Rajakaluves and waterlogging areas have been identified,” he said.

The Chief Minister added that orders have been issued to take all possible measures to remove all bottlenecks for smooth flow of water in Rajakaluves and low lying areas. Bommai has also ordered for the construction of proper secondary and tertiary drains to avoid flooding in low-lying areas. “In many places, rainwater is gushing into the homes due to encroachments and construction of houses on lake beds. Bruhat Bengaluru Mahanagara Palike (BBMP) would build secondary and tertiary drains in such areas. These works would be completed within a year,” Bommai said.

Replying to a question on flooding in areas where Rajakaluve works have not been completed, Bommai said, “the city has about 800-kilometre long Rajakaluves. Last year work on about 400-kilometre of Rajakaluves was completed. The work on the remaining length of Rajakaluves would be completed this year to enable a smooth flow of water.” The IMD in a tweet today said, “Isolated heavy to very heavy falls very likely over Kerala-Mahe, Coastal and South Interior Karnataka on 19th and over Tamil Nadu on 18th with extremely heavy rainfall at isolated places over Kerala-Mahe, Coastal and South Interior Karnataka on today, the 18th May.”

The IMD on Monday declared the onset of monsoon over the Andaman Sea. This year, the early monsoon has been attributed to Cyclone Asani which brought in plenty of moisture over the region. The IMD, in its daily bulletin on Monday, said that the Southwest monsoon winds are all set to strengthen over these regions in the coming days, and the islands will experience rainfall. (ANI)