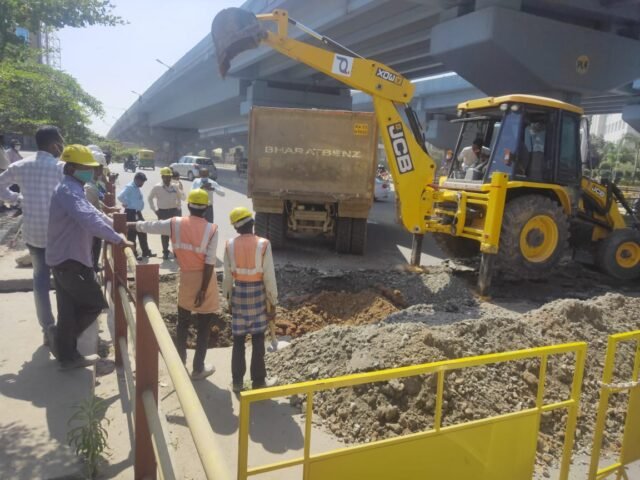 Illegal road-cutting is considered a serious offence by BBMP, but it remains to be seen whether the civic agency will walk the talk against a reputed builder of Bengaluru following road-cutting sans permission by a tech park on the Outer Ring Road. The road-cutting ended up disrupting traffic near Doddanekundi.

Bagmane World Technology Centre in Marathahalli is in the line of fire after a former nominated BJP corporator, who claims to be people-friendly and to care for the interests of the residents staying around Mahadevapura, reportedly disregarded BBMP engineers who had asked the tech park to obtain road-cutting permission.

Duly sanctioned road-cutting charges would have been no more than Rs 45,000, besides which the traffic police would have put in place a traffic diversion till the road-cutting was over. But at the behest of the ex-corporator, the road was cut illegally.

The road beneath the Outer Ring Road flyover near Doddanekundi was reportedly cut to avoid water stagnating in front of the tech park which was constructed at a cost of more than Rs 500 crore. TheBengaluruLive has sourced a picture of the incident.

We contacted BBMP engineers, who said off the record that a former BJP nominated corporator had asked them to allow the road-cutting without paying the prescribed fees to the civic agency. The engineers had reportedly demurred, more so as it involved the busy Outer Ring Road, but the former corporator reportedly went ahead with the road-cutting with the help of a JCB.

In response to queries by TheBengaluruLive, staff of the Bagmane group said the road-cutting was done to prevent water stagnating in front of the tech park and ‘spoiling’ the look of the property. But they were mum on the issue of illegal road-cutting.

Earlier, BBMP had chalked out plans to penalise agencies for illegal road-cutting. In 2018, a formal order was issued by the Urban Development Department to impose a fine of Rs 25 lakh on private and government agencies, and Rs 10 lakh on individuals, for digging roads without authorisation.

A division bench of Justice BV Nagarathna and Justice MG Uma has been hearing a writ petition filed by Vivek Menon (WP 42927/2015). The next hearing will be on March 2.

Also Read: When will Bengaluru be pothole-free: HC (https://thebengalurulive.com/when-will-bengaluru-be-pothole-free-hc/)

2 deaths on Sunday, 1 in Bengaluru

Building an API in 60 seconds, without any server setup