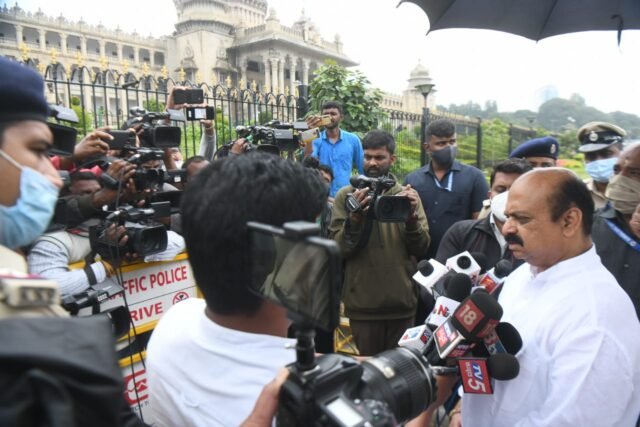 Karnataka Chief Minister Basavaraj Bommai on Sunday asserted that his government is ‘ready to sacrifice anyone involved’ in the Bitcoin scam and challenged the Congress to name the “influential people” it has alleged are behind the irregularities.

“The Congress says there are some influential people involved in it (Bitcoin scam). If you know them, then name them. We will investigate it without any second thought. If there is anyone involved in the country or in the state, we will initiate action mercilessly,” Bommai told reporters on the sidelines of an event here.

“We are the ones who brought out this scam. We will not spare anyone and are ready to sacrifice anyone involved in it. There is no question of any second thought on our decision.

To hide the role of Congress, you are naming persons who are nowhere in the picture,” he charged.

Surjewala had alleged in a press conference in Delhi on Saturday that the size of the scam could be much bigger because just on two days on December 1, 2020 and April 14, 2021 illegal transactions worth Rs 5,240 crore took place.

The Congress leader had also posed a series of questions to Prime Minister Narendra Modi and asked what was the role of Karnataka Chief Minister Basaravaj Bommai, who was the state’s home minister when the scam took place.

Surjewala also demanded to know why international investigation agencies, including the Interpol, were not informed about the stolen Bitcoins.

Lashing out at the Congress leader, Bommai said the BJP government had held the hacker Srikrishna alias Sriki, investigated him and exposed him unlike the Congress, who released him when they were in power in 2018.

Challenging Surjewala to provide whatever information he has to the Enforcement Directorate or the Karnataka police, Bommai said action would be taken immediately.

The Chief Minister also sought to know why the Congress government in Karnataka between 2013 and 2019 did not probe the matter when the scam started in 2016.

“If there was a Karnataka connection to it, then why did you not probe it when you were in the government? Surjewala should question the then Chief Minister Siddaramaiah and ministers why their did not heed to it,” Bommai charged.

He further said that Srikrishna was held for the first time in 2018, but was let go. If the police had then probed his background, they would have come to know everything about him.

“You could have done it in 2018. Why was it not done? You released him and allowed the problem to grow big,” Bommai alleged.

The Chief Minister said the hacker was arrested in a drug case in 2020 and a detailed interrogation revealed his role in hacking Bitcoin portals.

Bommai also hit out at Surjewala for relying on a Twitter handle to claim that transactions worth Rs 5,240 crore took place.

The Chief Minister said Surjewala should have spoken keeping the circumstantial evidence and witnesses with him, instead of basing his charges on tweets.

“If you rely on tweets on a Twitter handle and say that frauds to the tune of crores of Rupees has taken place, then I would clearly say that this does not suit the spokesperson of a national party,” Bommai charged.

He asserted that his government is untouched by this scandal because they were the ones who arrested the hacker, investigated the scam, exposed it and referred the matter to the ED, the CBI and Interpol.

Bommai added that his government is also providing all kinds of help to the ED and the CBI.

To a query on the number of Bitcoins held by Srikrishna, Bommai said the hacker had shown an exchange account as his, though no individual can have the exchange account. PTI

CM to flag off work on Kempegowda statue