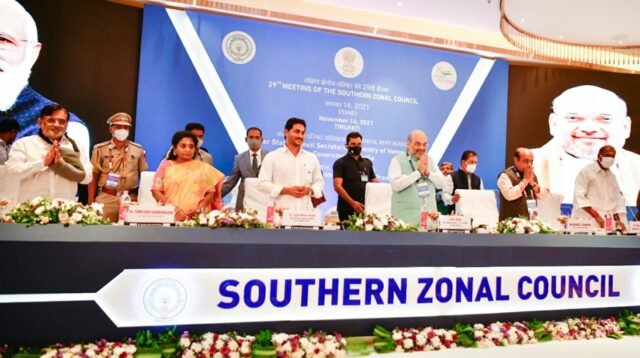 Among the several issues raised by Karnataka at the 29th meeting Southern zonal chaired by Union Home Minister Amit Shah, Karnataka Chief Minister Basavaraj Bommai on Sunday sought to secure its rightful share, in Cauvery, Krishna and Pennar basins, as was done in the case of Godavari diversion to River Krishna under Polavaram project.

Bommai said though the shares of co-basin states have not been decided in the above link, Tamil Nadu is going ahead with the Cauvery Vaigai-Gundar link, which is inadmissible in law.

Bommai reiterated that no statutory clearances should be given to large scale permanent projects, planned for utilizing surplus waters, in violation of Water Tribunal Awards.

Neither Telangana nor the Apex Council has a right to take up Lift Irrigation Projects at Palamuru Rangareddy and Nakkalagandi to draw large quantities of remaining surplus water from the foreshore of Srisailam reservoir on the Krishna reservoir, he said.

“We would welcome any initiative to this issue in the Southern Zonal Council Meeting,” he added.

With respect to construction of Rajiv Gandhi Sangama Banda barrage by Telangana, Karnataka would oppose the project of Sangam Banda as it will utilize the remaining water in the guise of savings which will come for review in 2050, Bommai said.

“If the remaining water is allowed to be utilized by the downstream States by way of permanent projects, Karnataka will be affected during its claims for an equitable share in 2050, ‘ Bommai said.

Moreover, Telangana cannot invoke the liberty clause to utilize the remaining water as it is not a lowest riparian state of Krishna basin. However, subject to the above reservation the State is ready to associate in conducting joint surveys, he said.

With respect to construction of Gundravulu Project across Tungabhadra river Andhra Pradesh, a joint survey has to be carried out to determine the extent of submergence of the villages and lands in Karnataka, Bommai said.

“Before that, I request Andhra Pradesh to furnish the details with regard to allocation of water, as submitted to the tribunal, along with approvals obtained from the central government,” he said.

Moreover, no projects in Telangana or Andhra Pradesh against Krishna water are permissible, if it is not a part of allocation, Bommai said.

The projects in Telangana or Andhra Pradesh in the name of savings or temporary use of surplus are only intended to permanently commit the surplus water to the prejudice of the northern part of Karnataka, he said. UNI

One district’s DC has no role in oxygen supply to another district: Mysuru DC...

Karnataka govt will not ask IT companies to open offices, WFH may continue: Minister