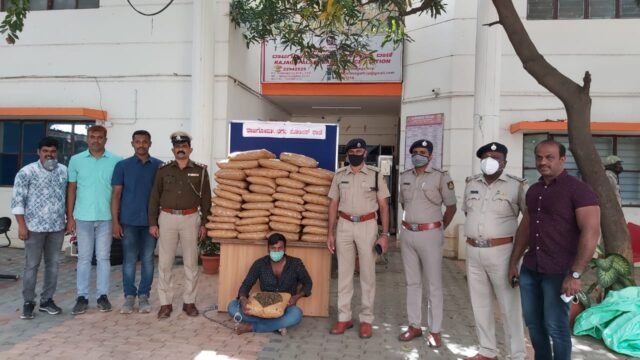 Police have nabbed a 26-year-old youth for his alleged involvement in selling ganja and also seized 17 kg of narcotic drug in Rajagopalnagar Police Station limits.

Police said on Friday that arrested Shivakumar, native of Chikkaballapur, was selling ganja when he was nabbed and 17 kg ganja seized and on his information, 93 kg of ganja was also seized from his house.

On questioning, Shivkumar, a truck driver, revealed that he was touring various States to deliver vegetables including Andhra Pradesh, Vijayawada, Visakhapatnam. He used to purchase Ganja from a person in Tirupati at a cheaper rate and sell it at a higher rate to customers in the city.

Police have registered a case and are investigating the source of ganja. (Agency)

Virus suspects at airport to be shifted directly to hospital