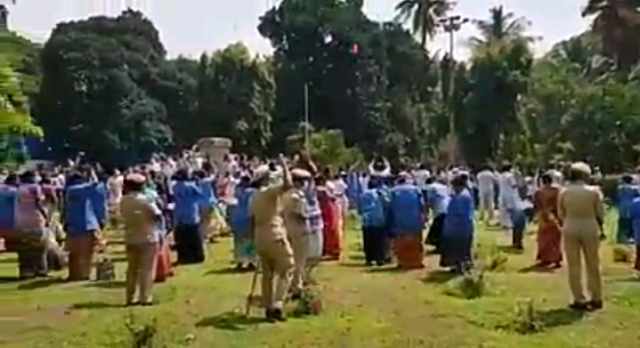 In a show of gratitude for ‘Covid-19 warriors’, an Indian Air Force MI-17 helicopter dropped flower petals over Victoria Hospital and Command Hospital on Sunday morning.

The helicopter flew over Command Hospital from Patanjali Gate towards ASC on Old Airport Road. At Victoria Hospital, the healthcare team came out to applaud the gesture.

According to reports, Command Hospital has tested 856 samples till May 1, of which 4 were found positive. Civilians from Chikkaballapur were tested positive at the hospital.

An IAF transport aircraft, C130 J Hercules, did a flypast over Vidhana Soudha in the afternoon.

Due to lockdown restrictions, the IAF band will not be stationary but will march around Victoria Hospital. The band has performed at the MG Road metro station and the Vidhana Soudha.

On a dissenting note, armed forces veterans  said the armed forces could have been put to better use than just ‘tokenism’.
Speaking to the media, Lt Col (retd) Rohit Agarwal said, “The forces can contribute more constructively by mobilising resources to assist in the movement of migrants back to their states, instead of this.”

Flower & fruit prices up, but so is festive spirit