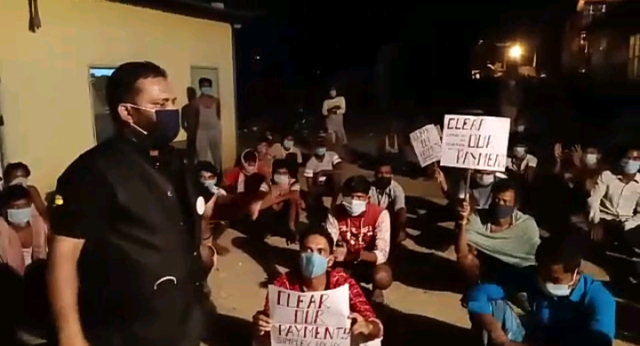 700 workers yet to get dues from Simplex Infra

An FIR has been registered against Salarpuria Sattva and Simplex Infrastructure Ltd. for non-payment of wages to workers under sections 420, 419, 406 r/w 34 of the IPC in the Byatarayanpura police station. Swaraj India activists filed an FIR on May 1 for non-payment of salaries for around 700 workers.

Prime Minister Narendra Modi had earlier urged all private sector companies to honour payment commitments to employees, but hundreds of workers are yet to get their dues.

Anang Nayak, a resident of Kannamangala and a native of Odisha, in his complaint has stated,  “I have been employed as contract labourer with Simplex Infrastructure Ltd for the past almost 1 year, as a labourer for its client Salarpuria Sattva Divinity Project, located in Nayandahalli, Bangalore-39 . I was doing housekeeping work well as painting work. At the time of employment, I had 16 labourers under me and it was agreed that I would be paid by the company  Rs 450 per day (12 hours).”

“Along with me, there are around 700 persons who are employed in the company as labourers, doing various menial occupations including housekeeping, painting, plastering and construction work.

“At the time of employment, it was decided that tile construction workers would be paid Rs 400, plaster and painting workers Rs 550-Rs 600 and  housekeeping staff Rs 400.

“Inspite of this arrangement, Salarpuria Sattva Divinity and Simplex Infrastructure Ltd. failed to make salary payments to me and the other workers. Therefore we were forced to approach the DCP and Labour Commissioner, who directed payment of the pending salaries. Through a letter dated 11/02/2020, signed by Assistant  General Manager J. Roy, it was agreed that the payment of the pending salary upto 31/12/2019 will be made on 31/03/2020, However, there was no payment done,  so we decided to approach the company authorities.  Instead of making the payment, we were threatened by Simplex Infrastructure Ltd. that we would be removed from our jobs.”

Following the FIR, the Byatarayanapura police are investigating the matter.

Meanwhile, thebengalurulive has sent message to Salarpuria Sattva Managing Director Bijay Agarwal seeking his reaction on the FIR registered against his company. Story will be updated as and when reaction from Salarpuria Sattva is received.

CM to address state at 5 pm