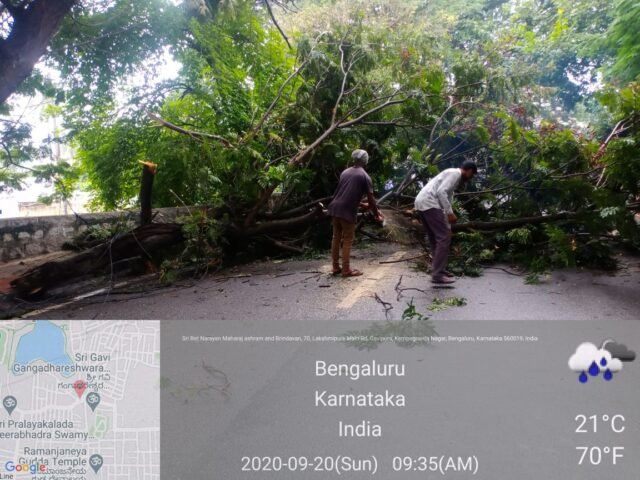 Following heavy rains across Bengaluru, Chief Minister BS Yediyurappa in Sunday called BBMP Administrator Gaurav Gupta and instructed him to pay attention to low-lying areas and raja kaluves. He said civic officials should be on stand-by 24*7 as there are chances of flooding and rain-related damage. The CM also spoke to the Udupi DC in this connection.

It has been raining in Bengaluru since the wee hours of Sunday and low-lying areas have been affected.

Many districts in the state, especially in the coastal areas, have also witnessed flooding in several areas.

Speaking to TheBengaluruLive, BBMP Commissioner N Manjunatha Prasad said no untoward incidents have been reported in Bengaluru as yet but officials have been directed to stay alert.

BBMP administrator Gaurav Gupta did not respond to WhatsApp messages from TheBengaluruLive on rain-related issues.

Meanwhile, several trees that were uprooted in Bengaluru south were cleared by the engineering team.

According to the KSNDMC rainfall forecast, generally cloudy skies with fairly widespread to widespread light to moderate rains are likely over BBMP areas.

Forecast for the next 2 days (ending at 8.30 am of September 22): Scattered light to moderate rains likely over BBMP areas.