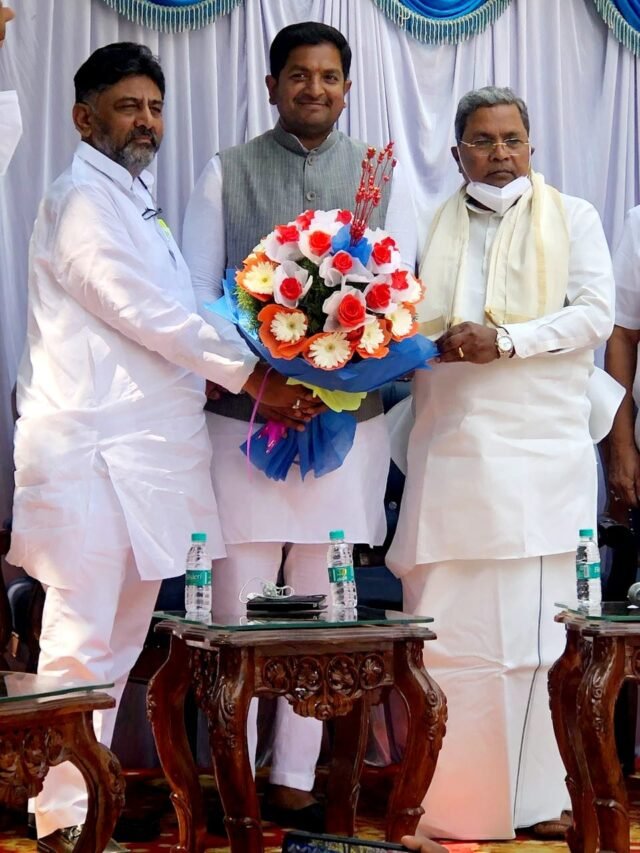 BJP MP’s son and Independent MLA Sharath Bachegowda on Thursday announced his outside support to the Congress in Karnataka, and will be an associate member of the party in the Legislative Assembly.

Sharath, 37, son of BJP Member of Parliament from Chikkaballapur B N Bachegowda, gave the letter of support to Congress Legislature Party Leader Siddaramaiah, in the presence of KPCC president D K Shivakumar, host of other leaders, and a large gathering of his supporters here. Sharath represents Hoskote assembly constituency in Bengaluru Rural district.

Being an Independent MLA, he cannot join the Congress, but can extend support on issues as the associate member of the legislature party.

However, his supporters can join the Congress.

He had held a series of meetings with senior Congress leaders including AICC general secretary incharge of the state Randeep Singh Surjewala, Siddaramaiah and Shivakumar recently regarding supporting the party.

Sharath and his supporters had joined hands with the Congress during the gram panchayat polls, and he recently told PTI he wants to be associated with a national party which would give him an opportunity to lend voice to broader issues.

Speaking at an event organised for this purpose, Sharath said his decision to support Congress was keeping in mind the interest of his voters and development of his constituency.

He said he will continue as an independent MLA.

CLP Leader Siddarmaiah said Sharath has sought the Congress party’s support and it was ready to extend him all support.

“He also has extended his support to our legislature party on the floor of the House, and I have accepted his support,” he said.

Remembering that he too had campaigned against Sharath during the December 2019 bypolls, Siddarmaiah said, “he (Sharath) is anti-BJP and will join hands with us in our fight against the BJP and this government.”

KPCC chief Shivakumar said it was time for celebration, recalling that he had been making attempts for 30-40 years to gain support of the people of Hoskote, and somehow it has been achieved with this association through Sharath.

Sharath had served as secretary of BJP”s Yuva Morcha in the past.

He was expelled from the saffron party as he rebelled and decided to contest against the party’s official candidate MTB Nagaraj during the December 2019 assembly bypolls.

Sharath was against the BJP’s decision to field Nagaraj, who had jumped ship from the Congress.He went on to pull off a victory in the bypolls with his ”Swabhimani” campaign as an independent candidate.

In the 2018 assembly election, Sharath, who was the BJP candidate, had lost to Nagaraj, who was then with the Congress.

According to sources close to him, Sharath is looking forward to secure his political future with the Congress realising his chances are bleak in the BJP, with Chief Minister B S Yediyurappa backing his opponent Nagaraj, by making him MLC despite losing the assembly bypolls and also inducting him as municipal administration minister.

By supporting him, Congress too plans to bank on Sharath and his support base for improving its prospects in Hoskote.

Sharath is seen as a “local boy” as his father and now MP had represented the seat several times in the past from the Janata Dal and also the BJP, sources said. PTI

‘Drive of honour’ for Mysuru-origin doc