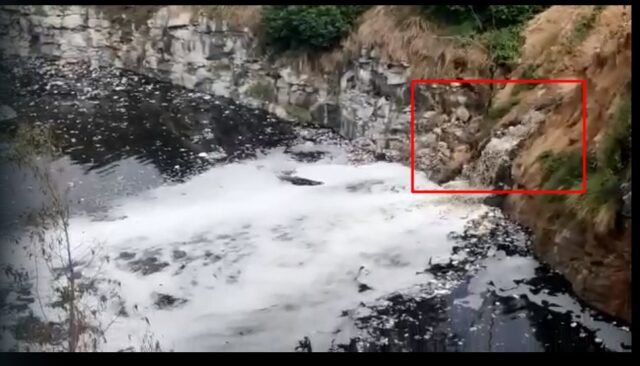 With heavy rains battering Bengaluru city, Karnataka Chief Minister Basavaraj Bommai, who has the additional responsibility of looking after Bengaluru, has the unenviable task of putting an end to the illegal dumping of the city’s waste in the Kannur and Mitaganahalli quarries even as the 100-foot-deep quarries have been filled with rainwater over the last three days and are now huge cesspools of leachate.

Tuesday’s rains would have come as an eye-opener to new BBMP Chief Commissioner Tushar Giri Nath. Since taking charge of the civic agency on May 6, Giri Nath has yet to turn his attention to the landfills which have had to cope with a humongous 30 lakh tonnes of Bengaluru waste since the last couple of years.

Besides, with the heavy rains over the last couple of days, the problems will be compounded if the Kannur lake close to the Kannur and Mitaganahalli quarries overflows and water enters the landfills.

Sources told TheBengaluruLive that the tenders to dispose of waste scientifically at these two quarries expired a couple of months ago but the civic agency continues to illegally dump the city’s waste at both sites.

Why are Congress and BJP MLAs mum?

Interestingly, both these quarries fall under the Byatrayanapura and Mahadevapura assembly constituencies represented by Krishna Byre Gowda (Congress) and Arvind Limbavali (BJP) respectively. The rains in the area have flooded the quarries and a major worry is that rainwater mixed with leachate may overflow from the quarries and enter the neighbouring villages if heavy rains persist over the next couple of days.

No dumping in last two days

According to sources, there are around 750 10-wheel compactors that lift Bengaluru’s waste and dump it in different areas of the city. Of these, around 400 compactors are sent to the Kannur and Mitaganahalli quarries while some go to MSGP and KCDC. Each compactor can carry 9 tonnes of waste and around 3,000 tonnes of mixed waste is currently dumped every day in these quarries.

The sources added that the Bagalur, Kannur and Mitaganahalli areas have already taken a humongous 30 lakh tonnes of the city’s waste.

Currently, due to the heavy rains, the Kannur and Mitaganahalli sites have not seen a single compactor dumping waste as all the vehicles have piled up are piled up outside the villages.

According to informed sources, senior BJP leader and Mahadevapura MLA Arvind Limbavali, on Wednesday spoke to some BBMP officials and warned them to take the necessary steps to prevent rainwater from entering the quarry and turning into a serious public health hazard. He reportedly said that if remedial action is not taken immediately, he would stop Bengaluru’s waste from being dumped in his assembly constituency.

Interestingly, the Mandur landfill also falls in Limbavali’s constituency and dumping there was stopped after villagers protested against BBMP sending the city’s waste there.

Sorry, no Holi for me: PM