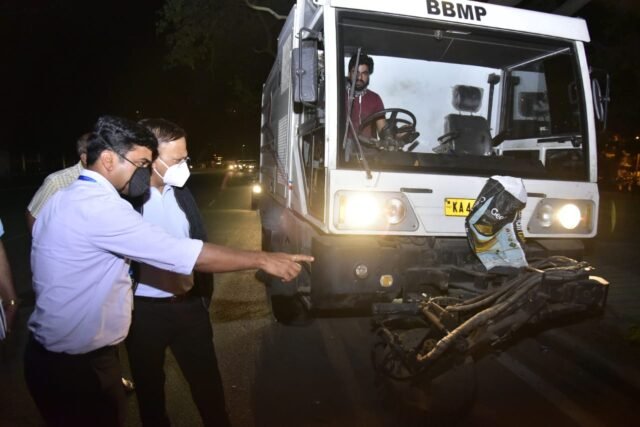 Nearly 14 days after assuming office as BBMP administrator, IAS officer Gaurav Gupta went on the night rounds of the city on Thursday, inspecting several ongoing Tender Sure projects and checking on the efficacy of night-time sweeping of streets.

Gupta was accompanied by BBMP’s Major Roads Infrastructure wing engineers Nandish and East Zone chief engineer Prabhakar who briefed him about the street sweeping technology adopted by the civic agency.

Gupta started his rounds at 11 pm from KG Road, via Hudson Circle to Mysore Bank Circle, where Executive Engineer Nandeesh arranged a demonstration of the street sweeping technology. He went on to Race Course Road, Shivananda Circle, Chalukya Circle, Infantry Road, MG Road, Anil Kumble Circle and Trinity Circle, and ended his inspection at 12.30 am at CMH Road.

He also inspected the ITC flyover where he expressed unhappiness over the maintenance of the flyover as grass was growing on the median. He observed that the street sweeping machine had not swept the flyover for several days, due to which mud was lying in the centre of the road.

At CMH Road, he noticed roadside debris and pulled up the engineers.

However, Gupta’s nocturnal inspection of civic work was missing one element, in that he could not witness the usual peak hour traffic jams. The problem is particularly acute in East Bengaluru with many roads dug up for Tender Sure projects.