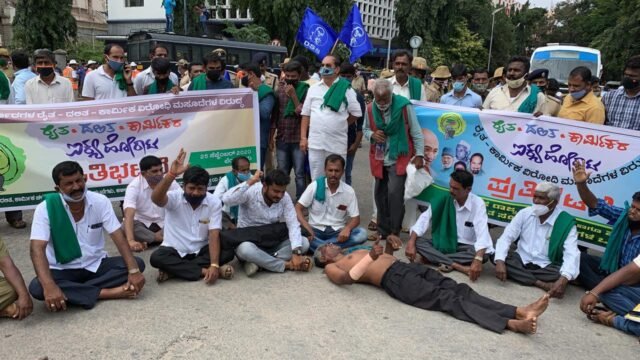 Farmers in Karnataka staged demonstrations across the state on Friday as part of a ”bandh” call given to protest the ”anti-farmer” policies of the central and state governments.

A large number of ryots from various parts of the state flocked to the state capital to take part in the demonstrations to register their protest against the amendments to the Agricultural Produce Marketing Committee Act and the Karnataka Land Reforms Act. Amendment to APMC Act would allow farmers to sell their produce directly to any purchaser outside APMC or in other APMCs.

The protesters called these amendments ”anti-farmer” and alleged that some people in power brought them to convert their black money into white.

A group of farmers blocked the busy Tumakuru road near Yashwantpur in the city. As the police reached the spot to clear the blockade, the farmers courted arrest and were taken away in buses.

Demonstrations were also held in other places, including Mysuru and Davangere. A large number of police personnel were deployed at many places to avert any chock-a-block. Peasant leader Kuruburu Shanthakumar, who is among those leading the agitation, said all the highways to Bengaluru will be blocked.

He said more than 34 organisations have come together and they will stage agitations across the city. Shanthakumar alleged that the government did not take the farmers into confidence while bringing amendments to the law pertaining to the agriculture sector. (PTI)

Speaker to take a call on next assembly session