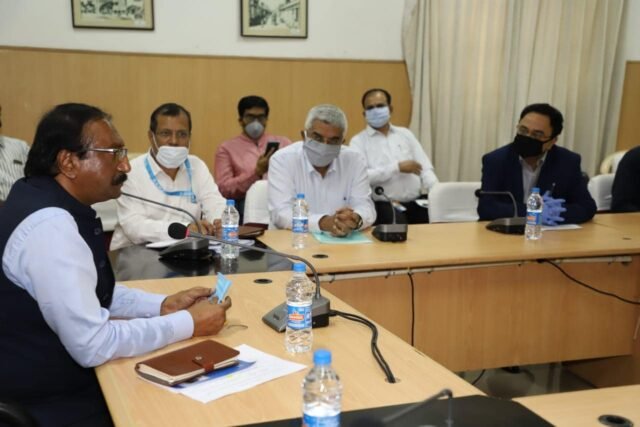 When it comes to implementing rules, the ‘janata’ expects its lawmakers to lead by example. No surprise then that BBMP Commissioner BH Anil Kumar is being trolled by netizens on his official Facebook profile for not covering his face and holding a mask in his hand during a meeting with builders which was attended by more than 20 people.

The meeting was held on May 5, just hours before he was directed by Chief Minister BS Yediyurappa to abide by the government’s order and collect a fine of Rs 200 from citizens not covering their faces in public, not the Rs 1,000 penalty that the civic body had arbitrarily imposed. BBMP had to toe the government’s ‘fine’ line, thanks to a four-part expose by thebengalurulive.com.

On his official Facebook profile, the BBMP Commissioner posted 3 photos with a caption that read: “Met builders and contractors to discuss issues related to resumption of construction activities & stranded migrant labour in #Bengaluru.”

One user commented: “Sir, in every picture I see you without mask… we want to know…” Another, Veena Suryanarayana, after seeing plastic water bottles kept on a table, said: “There was a BBMP order regarding ban of single use plastic water bottles. Is it that all rules are for the common man?” Hemanth Singh said: “Yes, government officials are like Gods. Rules don’t apply to them.”

Kiran Nanjunda JN in a sarcastic comment said: “Coronavirus doesn’t spread through plastic for the time being!!”

Vicky Bangalore said: “Many meetings your pics show without mask. You should be a role model when you imposed fine.”

TheBengaluruLive has sought a response from the BBMP chief on whether he will be a role model for the 1 crore citizens of Bengaluru  by duly paying the penalty for not wearing a mask.

TheBengaluruLive is awaiting a reaction from BBMP commissioner and his reaction will be published as and when he reacts on it.

As per his own revised order, the Commissioner had mandated covering of faces in public places and any workspace with more than 5 people, failing which a penalty of Rs 200 would be levied on the individual concerned.

Not only the civic chief’s own response, it will be just as interesting to see if Chief Secretary TM Vijay Bhaskar, who is chief of all IAS and IPS officers in the state, directs other officers to impose the fine of Rs 200 on the BBMP chief for not covering his face in a meeting which more than 20 people had attended. Significantly, the Central guidelines themselves mandate covering of one’s face in a place where more than 5 people have gathered.

Corona alarm: Minister urges Bengalureans to step out only if absolutely necessary