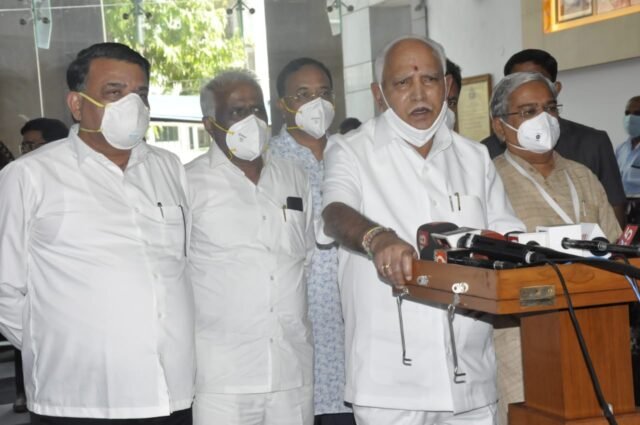 Karnataka Chief Minister B S Yediyurappa on Friday said he will abide by the BJP high command”s direction regarding the much awaited expansion of his cabinet.

BJP National President J P Nadda will discuss with Prime Minister Narendra Modi and other senior party leaders in this regard and communicate about the future course of action, he said.

“I have discussed in detail with our national president regarding the cabinet expansion. He said he will discuss with the Prime Ministers and others and let me know,” Yediyurappa said.

Speaking to reporters after meeting the BJP national President in New Delhi, he said, earlier too discussions have happened in this regard with Home Minister Amith Shah and Nadda, and have also informed the Prime Minister about it.

“He (Nadda) has assured that he will speak (to the PM and other leaders) and let me know,” he added.

Yediyurappa earlier in the day had met Prime Minister Narendra Modi and held discussions regarding various issues concerning the state.

Responding to a question as to when the expansion was likely, Yediyurappa merely said, “let”s see…they (high command) will discuss and inform.”

Asked whether it will be expansion or reshuffle, he said, it will depend on the directions from the Prime Minister and the national President.

The Chief Minister further said, his desire was to complete the process before the legislature session, but things will depend on what the high command says.

The monsoon session of the state legislature is scheduled from September 21 to 30.

Cabinet expansion or reshuffle is expected to be a tightrope for the 77-year old Yediyurappa, considering too many aspirants.

While several of the old guard are waiting for a chance to be inducted into the Ministry, those who defected from the Congress and JD(S) like A H Vishwanath, R Shankar and MTB Nagaraj, who are now BJP MLCs, are also aspiring for slots.

The cabinet currently has 28 members, and six berths are still vacant.

Meanwhile, there are also strong speculations about the possible change in leadership in the future, considering Yediyurappa’s age.

However, it has been rejected by senior party leaders like BJP state President Nalin Kumar Kateel, Minister R Ashoka among others. (PTI)