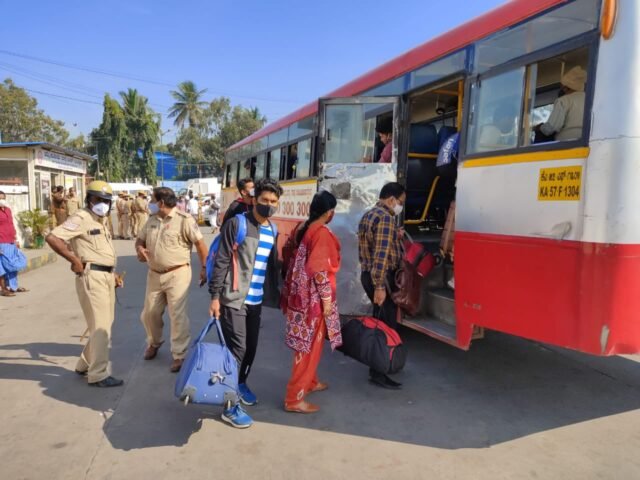 The employees of the state owned transport corporations continued their strike for the third consecutive day on Saturday, leaving commuters stranded across the state.

Very few buses of the BMTC and the state transport corporations operated as the transport employees did not join duty and staged protests across the state at important bus terminus in the district and Taluk headquarters.

The BMTC public relation officer said 94 city buses operated against the strength of over 6,500 buses. Though the protests were peaceful, sporadic incidents of stone pelting on buses ferrying passengers were reported. There were also incidents where bus drivers and conductors were abused for joining duty and going against the interests of the agitating staff.

In Bengaluru, the police took a few agitators in their custody at Majestic, which is the Central Bus stand of the KSRTC and the BMTC. The protesters have been demanding salaries equivalent to the state government employees and compensation similar to the COVID-19 warriors in the event of death due to coronavirus.

The state government has appealed to the transport department employees to call off their strike as commuters were facing hardship. However, the employees were unrelenting. According to officials of the KSRTC and the BMTC, these corporations have suffered a loss of about Rs 6 crore in the last three days.

The state has been witnessing back-to-back protests for the past five days since December 8. Earlier it was the farmers’ agitation and now the transport employees’ strike. PTI