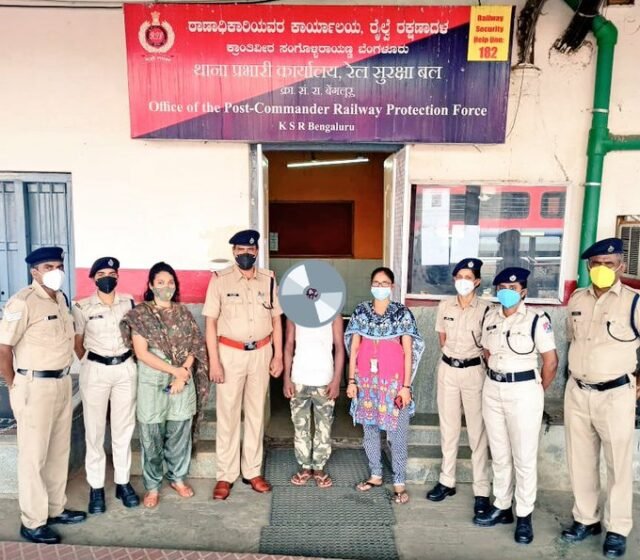 Sanjeev Kishore, General Manager, SWR has appreciated the efforts made by the RPF and has reiterated that the security of passengers is top priority for SWR.

Some examples of the good work done by the RPF of SWR:

In order to prevent/detect the trafficking of children and women, during August 90 children (77 boys, 13 girls) were rescued and reunited with their parents/handed over to NGOs/ police

On 8 th Sep. ,four boys aged between 13 and 16 yrs were rescued by RPF at Bengaluru Cantonment Railway station under #OperationNanheFaristeh and reunited with their families.#EndHumanTrafficking#EveryChildMatters@RPF_INDIA@drmsbc pic.twitter.com/xYB8d8N1h1

In order to curb the menace of blackmarketing of railway tickets, special drives were conducted at travel agencies/agents all over Karnataka and Goa. 25 touts were arrested and prosecuted for possession of 104 reserved tickets valued Rs 1,30,730 and 2,770 used tickets valued at Rs 22,59,579.

To provide enhanced security to women passengers, women-only teams have been formed. These teams visit all the passenger coaches and interact with women passengers, inform them of security helpline 182, collect the seat/berth numbers of single female passengers and share the details with RPF personnel deployed at en route stations. At the destination station, feedback from the passengers is collected. ‘Meri Saheli’ members also help women passengers in availing auto rickshaw and bus services, and in carrying belongings of elderly and needy passengers. Presently, 27 trains have been covered under this operation.

During the current year, 11 persons were arrested and railway property worth Rs 1,60,087 was recovered.

During the current year, left-behind items like laptops, mobiles and gold/silver ornaments worth Rs 6,19,721 were recovered and handed over to their owners.

"Yaso Labhaswa",Attain Honour .. RPF realising it's motto by Serving people..
On 11.09.2021 ,A leftover cover containing land documents and two signed cheques worth 3,00,000/-was retrieved by RPF staff at Davangere and handed over to the owner after due identification. pic.twitter.com/NuHem5i64z

During the current year, liquor bottles/sachets etc worth Rs 26,521 were seized and handed over to the Excise Department.

On August 12, AK Tiwari, IPF/YPR and team while conducting an I-Day bandobust found 2 unclaimed bags containing 5 packets of ganja weighing about 10.95 kg and valued at Rs.1,09,500. In this connection, a case has been registered under the NDPS Act.

The RPF supplemented and assisted the Government Railway Police (GRP) in the arrests of 7 persons involved in thefts of passenger belongings.

On two occasions, the RPF rendered first aid to some passengers and shifted them to a nearby hospital.

On an average, 43 to 45 special/mail/express trains are escorted by 85 to 90 RPF personnel.