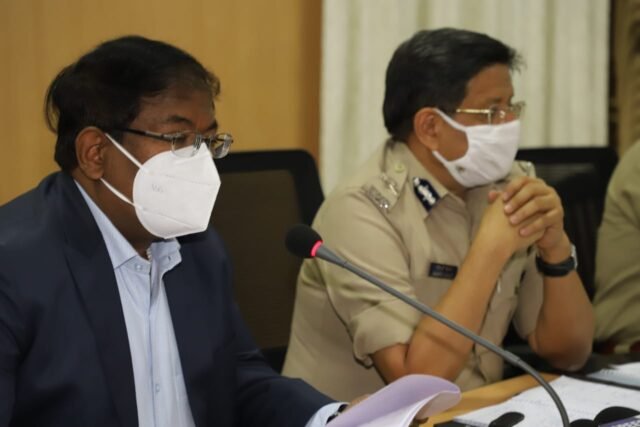 Ban on gatherings, alcohol after 5 pm on Sunday: Prasad

Covid patients will be screened before voting

All campaigning for the Rajarajeshwarinagar assembly constituency will have to end after 6 pm on Sunday evening. The Election Commission has put the brakes on all kinds of campaigning and has appealed to all persons, except voters of the area, to leave the assembly constituency. BBMP Commissioner N Manjunatha Prasad, who is also the electoral officer, has warned of stringent action against violators of the rules.

Prasad, alongwith city police commissioner Kamal Pant, held a joint press conference on Sunday at the BBMP headquarters on the issue of election preparations and security measures. As per Prasad, around 9 additional flying squads, 8 VST teams, 38 marshals, 5 videographers, 56 sector officers and 8 excise teams are being deployed to ensure that the polls are conducted peacefully and properly. He said suspicious vehicles would be inspected and action would be taken against law-breakers.

“Section 144 and a ban on sale of liquor will be in place from 5 pm. Exit polls and opinion polls are not allowed. Exit polls cannot be conducted till 7 am on November 3,” Prasad said.

“Health Department personnel will be at booths to monitor the presence of corona-infected voters. Covid patients will be scanned before being allowed to vote,” he added.

City police commissioner Kamal Pant said the 21-day election campaigning process was about to end in a peaceful manner. “There are 30 teams monitoring the election, and of the 678 booths 82 booths are sensitive. We will be deploying one Assistant Sub-Inspector and three support staff at each sensitive booth. Home Guards will also be deployed. Altogether 2,563 security personnel will be deployed,” Pant said.