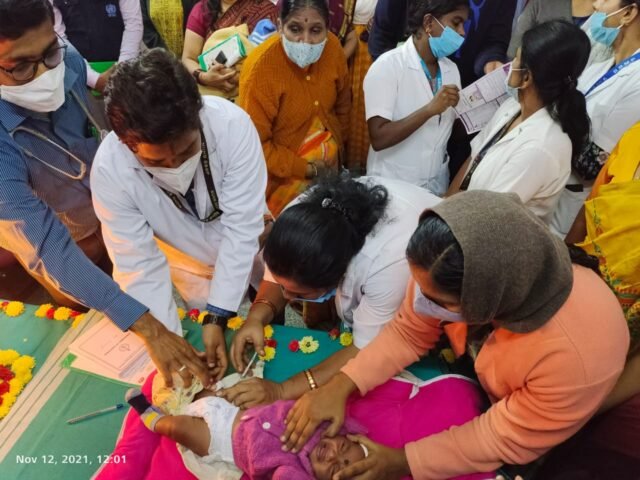 Under the Universal Immunization Programme, the PCV (pneumococcal vaccine) programme was launched by BBMP Special Commissioner (Health) Dr KV Thrilok Chandra on Thursday, November 12, on the occasion of World Pneumonia Day at Dasappa Hospital, near Town hall, in the city.

Among those present on the occasion were the Chief Health Officers (Public and Clinical), the District RCH officer , the CPMO-NUHM, HOs, the respective MOHs and MOs and representatives from the World Health Organization, JSI and UNICEF.

The PCV schedule for children is: Two primary doses at 1½ months and 3½ months (6 weeks and 14 weeks), and one booster dose at 9 months of age.

Young and old at greater risk

Pneumococcal disease is the name of a group of diseases caused by a bacterium, streptococcus pneumoniae (pneumococcus). Streptococcus pneumoniae is a leading cause of bacterial pneumonia in children under 5 years of age. Young children (particularly those under 2 years of age), the elderly, the immune-suppressed and the malnourished are at increased risk of getting pneumococcal disease.

Over 1.2 million children die before their fifth birthday in India. Nearly 15.9% of these deaths are due to pneumonia. In 2015, streptococcus pneumonia is estimated to have caused around 1.6 million cases of severe pneumococcal disease (including severe pneumonia and meningitis) and nearly 68,700 deaths in 1-59 months-old children.

PCV is safe and effective and reduces the incidence of pneumonia, meningitis and other serious bacterial infections caused by pneumococcus. PCV also provides protection to children too young to be immunized and adults with a substantial risk of pneumococcal disease (eg, HIV-infected).

PCV was first launched in 2000 in the US. As of June 2020, 146 countries have introduced PCV. Kazakhstan was the first country in Asia to introduce PCV in 2011. In India, PCV was introduced in 2017 in phases in Bihar, Himachal Pradesh, Madhya Pradesh, Rajasthan and Uttar Pradesh. PCV introduction is now planned across all states and UTs.

No plan to stop or curtail train services, no. will be increased on demand:...