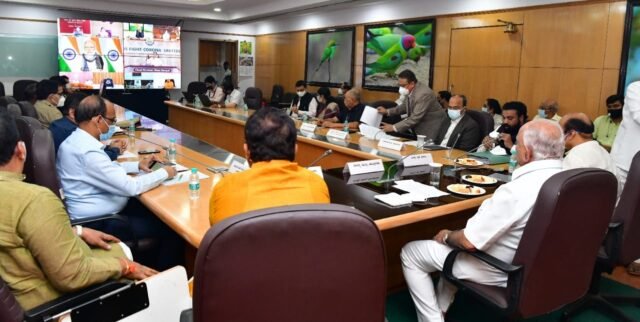 Prime Minister Narendra Modi has indicated that the COVID-19 vaccine was likely to be ready soon and has asked states to prepare for its quick and effective distribution, Karnataka Chief Minister B S Yediyurappa said on Tuesday.

“He (PM) spoke about it (vaccine) and there are indications that it may be ready in about four weeks, we (centre) are preparing for it and asked the states to also make all the necessary arrangements,” Yediyurappa said.

Speaking to reporters in Mysuru, he said it may take time, four-five weeks, but efforts are on in this direction.

“We have been told to make necessary arrangements for the storage and distribution of vaccines once available,” he said, adding that it may take four, five or six weeks time for the vaccine to come. The Prime Minister has asked us to maintain caution regarding the spread of COVID,” he said.

Participated in the Video Conference today chaired by PM Shri @narendramodi Ji on Covid19 management. Discussed the state's plan for vaccine administration and assured Karnataka is fully equipped for a smooth roll-out of the vaccine as and when it's ready.@AmitShah @PMOIndia pic.twitter.com/XpsRuQkyQD

The meeting comes as the central government has been putting in place measures for quick and effective distribution of coronavirus vaccine when it becomes available.

State Health Minister K Sudhakar in a statement said, as per directions of the union government, preparations are on for vaccine distribution in the state.

He said 29,451 vaccine distribution centres and more than 10,000 vaccinators have been identified.

There are about 2,855 cold chain centres in the state and cold storage facilities of the Veterinary Department and private hospitals will also be utilised, he added. PTI