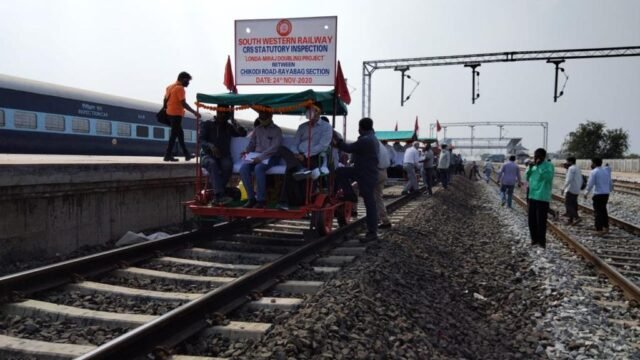 This double line between Raybag and Chikodi is part of the 186 km of doubling of Londa – Miraj project sanctioned in 2015-16 at a cost of Rs.1191 Crore.

The speed trial conducted was very smooth. The inspection commenced from Chikkodi at 09.30 hrs. and finished at Raybag at 12.30 hrs. At Raybag, Station yard and Raybag Station building with passenger amenities was also inspected.

The new BG doubling line is in Belagvi district of Karnataka state and will be opened to simultaneously for goods and passenger traffic between Chikodi Road and Raybag stations. There are 21 Minor Bridges, 4 Road Under bridges and one Canal Bridge on this section. One manned Level crossing with Spl Class interlocking has been provided.

The doubling between Ghatprabha to Chikodi Road (16 Km) was commissioned last year. This section between Kuduchi to Raybag is targeted for commissioning by this financial year. During the period of Late Suresh Angadi, MoSR, this project was being personally monitored by MoSR for improving connectivity between Bengaluru to Mumbai.

According to South Western Railway (SWR) Doubling and Electrification work are in progress and once this is completed Bengaluru to Mumbai connectivity will further be strengthened.

BMTC should be No 1 transport corporation in country, urges Karnataka CM

Karnataka’s first ever rollout of Electric Buses for public transportation

Karnataka to announce Class 12 results on Tuesday at 4.30 pm