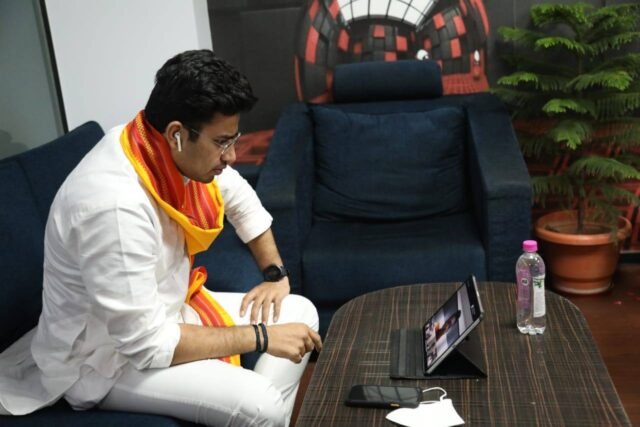 In a Facebook post, Bengaluru South MP says he has directed officers to attend to distress calls

Netizens who criticised Bengaluru South MP Tejasvi Surya for not visiting rain-affected areas were probably unaware of the fact that he was monitoring the situation by being in constant touch with civic officials.

Hosakerehalli and Koramangala 4th Block were the two major localities which were badly affected due to heavy rains in the last 2-3 days.

In a Facebook post, Surya said, “I have instructed officials to attend to waterlogging & distress calls on priority in a meeting with BBMP and BWSSB officials of Bengaluru South. Officials are monitoring and clearing blockages to sewage lines since last evening.

“BTM Layout & Koramangala have been severely affected due to the rain, with residents complaining of water entering their homes.

“A low-lying KC valley channel & high pressure on the storm water drain have led to this waterlogging.

“Officials assured us that work on a parallel line would be completed within 2 months.

“The Karnataka government, under the leadership of Sri BS Yediyurappa, understands residents’ issues. The CM visited rain-hit Hosakerehalli along with Revenue Minister Sri R Ashoka & (both) are monitoring the situation continuously.

“Apart from directing officials to tackle the flood-like situation in Bengaluru, the CM has announced Rs 25,000 for affected families.

“In Basavanagudi, MLA Sri LA Ravi Subramanya has supported the reconstruction of the compound wall of the Sri Gavi Gangadeshwara Temple, which collapsed due to heavy rain. He also directed officials to clear water in low-lying Srinagar & Hanumanthnagar.”

Surya concluded on an optimistic note by saying, “All waterlogging would be cleared soon. Stay safe, Bengaluru!”

No exams for classes 1 to 6