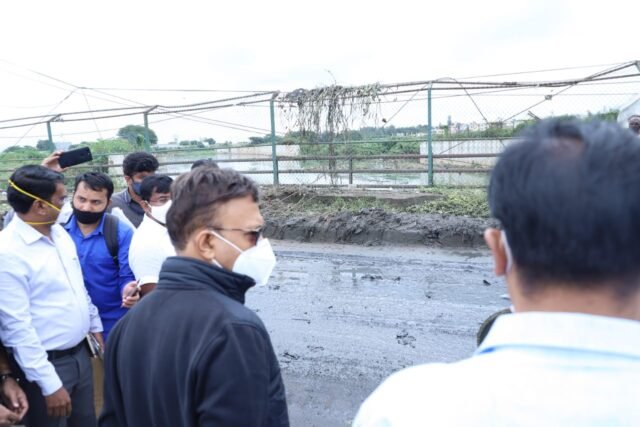 Within 24 hours of assuming charge as the administrator for Bengaluru city, IAS officer Gaurav Gupta did a recce of rain-ravaged  East Bengaluru, accompanied by a clutch of IAS officers and civic engineers. His first encounter with a blatant irregularity was when he learnt that the flooding in Manyata Tech Park was because the storm water drain had been covered with concrete slabs, preventing civic staff from desilting the drain.

Gupta was informed that the Hebbal and Rachenahalli lakes are connected to the storm water drain.  BBMP’s Chief Engineer (Storm Water Drains) BS Prahlad said that overflow from the lakes passes through the Hebbal valley near Manyata Tech Park. The storm water drain is covered with concrete slabs and due to this, silt removal couldn’t be undertaken. “The drain was covered by the Embassy group and now they need to remove them and clean the silt on their own,” Prahlad said.

On hearing this, Gupta gave one week’s time to the Embassy group to remove the concrete slabs and clean the drain. “If they fail to act within the stipulated time,  it will be on officials to remove the concrete blocks and clean the drain. Later,  the engineers will have to impose a double penalty on the Embassy group,” he said.

The Jawaharlal Nehru Centre for Advanced Scientific Research was also affected during the recent rains. Local residents said the roads are waterlogged for hours after a downpour. To this, the Chief Engineer (Lakes) said the storm water drain connecting Amrutahalli lake and Rachechanahalli lake overflows during heavy rains and the surrounding area gets flooded. He said a  diversion line would solve the problem.

The administrator said  BBMP and BWSSB officials should resolve the problem  quickly.

An inspection of the Rachenahalli lake identified the problem as the small size of the inlet canal. The 650-metre diversion line would solve the problem, the Chief Engineers (Lakes) said.

Whenever there is heavy rain,  the ‘rajakaluve’ (storm water drain) near the Hennur railway bridge overflows, causing problems for traffic.

Gupta was told that repair work has been undertaken by the Railways.