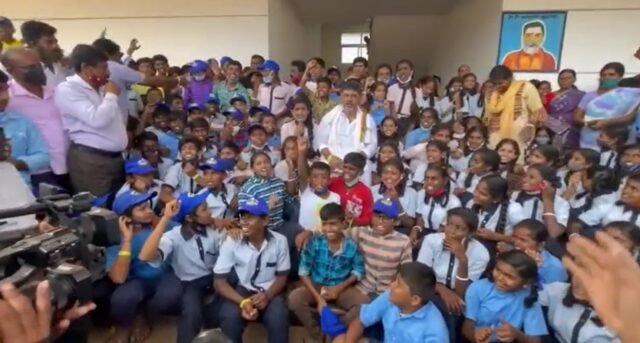 After refusing Covid-19 test, DK Shivakumar sits cheek by jowl with scores of schoolchildren at his native village in Ramanagara

Karnataka Congress chief DK Shivakumar’s truculent refusal to get himself tested for Covid-19 has not only sent mixed signals to the political establishment and the common man, he made matters worse by subsequently mingling with and creating an infection risk for several schoolchildren.

On Sunday night, Shivakumar, who is heading the Mekedatu drinking water project ‘padayatra’ from Kaveri Sangam in Ramanagara district, had rejected the request of government health staff to undergo a Covid-19 test. Not only that, he even behaved rudely with the officials who were only discharging their duty.

On Monday morning, after performing a pooja at a temple in his native village of Doddalahalli, the KPCC president visited the government school where he had undergone his primary education and met the schoolchildren.

A video clip shows Shivakumar sitting in the midst of the children without wearing a mask. Neither was there any attempt on his part, as a responsible public figure, to tell the children to maintain social distancing.

‘Take action against him’

An expert who viewed the clip criticized the state Congress leader for taking photographs of the occasion while sitting surrounded by the children. “First, he refuses to undergo a Covid test. Then, he again violates the rules and sits with the schoolchildren without wearing a mask, risking the health of scores of the children. The Karnataka government should initiate strict action against such politicians,” said the expert on condition of anonymity.