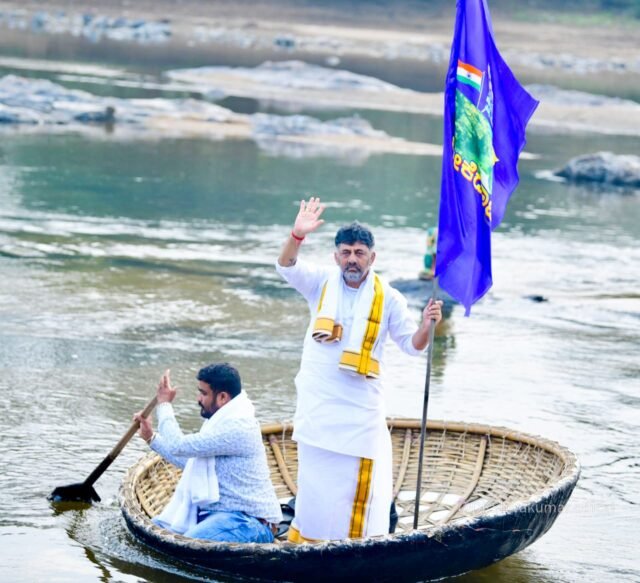 Approached by health team, Mekedatu padayatra-bound Shivakumar dares govt to book him and other Congress MLAs and send them all to Ramanagara Jail

Karnataka Congress chief DK Shivakumar was at his truculent best on Sunday when he refused to undergo a Covid-19 test and dared the state government to book and arrest him. Shivakumar’s show of defiance is sure to raise questions amongst common citizens over officials ordering Covid tests in entire apartment complexes if even a single occupant is found infected, but not having the ‘guts’ to haul up defiant test-refusing ‘netas’.

The officials’ unsuccessful bid to conduct an RT-PCR test on the KPCC president came after Shivakumar had completed 15 km of the Mekedatu drinking water project ‘padayatra’ on day one of the 10-day rally and had reached his native village of Doddalahalli.

As seen in a five-minute video clip, the Ramanagara district Additional Deputy Commissioner along with health staff approached Shivakumar for an RT-PCR test, but the Congress leader bluntly refused to cooperate.

‘None can touch me’

A Congress worker is seen telling Shivakumar that the health team had come to conduct Covid tests. Shivakumar responded by saying they could conduct their tests, but when his younger brother DK Suresh, who is the Congress MP from Bengaluru Rural, said that “they have come to test you”, Shivakumar shot back: “No one can touch me. No one can ask me anything. Who has sent you? I am a representative and if I have any problems, I will tell you. Bl@*dy fellows, they are blackmailing me. They can’t blackmail me. Please go and tell your health minister, yaaron horagadeinda bandida bacchagala jyote attadali (to play with kids who have come from outside). Airport he bandiddavarege test madli (test those who have come to airport). Yen test kodudu? Avan bekadre test madiaikodli (what test? Let him give his test).”

The Congress leader continued in the same vein: “You have come with respect. Aee mister, yen aagiddira (addressing the Additional Deputy Commissioner). I am fit, fine. Arthaayta? (understood?). You can’t compel me. I know the law of this land. You tell your Home Minister and Chief Minister and Health Minister. I am not going to give any tests and it is not required for me. I have come walking 15 km and I will not do any test. You go and do any test on others.”

Shivakaumar added, “I did not expect this from the Chief Minister. This is a political battle.”

Going off at a tangent, the state Congress chief claimed that people were “hesitating” to cremate their loved ones. “Bodies were lying and during this time my brother DK Suresh wore a PPE kit to conduct cremations.”

Returning to the immediate ‘provocation’, he said, “I will not allow…you should not touch me. You should not come and meet me. I am happy that you have come to see my health but 100 members are deputed to take care of my health.”

Shivakumar is also seen in the video clip asking the officer to book cases against all the MLAs who participated in the ‘padayatra’. “I’ll share the list with you and you have the provision under the law to book cases against each of them. Let all the MLAs go to jail. I have seen Tihar Jail and now what is left is Ramanagara Jail. I will see that also. I never expected this from the Chief Minister … to send a team to me like this,” he said.

No blanket rule on wearing a mask