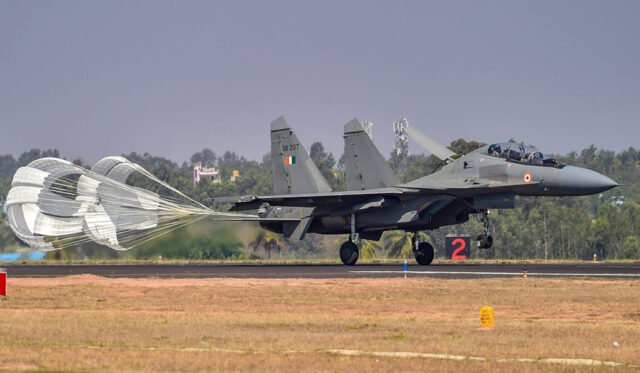 Chief Minister BS Yediyurappa participated in the Ambassador’s Round Table virtual summit regarding the 13th edition of the Aero India 2021, chaired by Rajnath Singh, Union Minister for Defence here on Wednesday.

The Chief Minister said that Karnataka has been the host State for the last 12 editions of Aero India in the past and it is a proud moment for having been chosen again as the venue for the upcoming 13th edition of Aero India-2021 scheduled to be held from 3rd to 07th February 2021.

It is indeed a unique challenge to Govt. of Karnataka and Ministry of Defence, Govt. of India to host this event during the time when the entire world is reeling under the global pandemic of COVID-19, he said.

The CM said that soon after the launch of the Aero India-2021 Website for booking of spaces at the venue, there has been a tremendously positive response with almost 90 per cent of the space being provisionally booked/blocked.

The Government of Karnataka has adopted various pro-active measures for containing the Pandemic and is also ensuring a pandemic free environment to host the Aero India-2021, he said.

The SOPs are being formulated in order to ensure the safety of International Delegates, participating dignitaries and the general public with strict adherence to the norms of thermal screening, sanitization and social distancing to be observed at all locations inside and outside the venue, the Chief Minister said.

The State of Karnataka has prominent space in the Aerospace and Defence Map of the Country catering to nearly 25 pc of India’s Aircraft and Spacecraft Industry.

Karnataka also contributes nearly 65 pc of the country’s Aerospace related exports. 67 pc of the Helicopter and Aircrafts manufacturing for Defence Services is done in Karnataka. Karnataka is also the first State in the Country to formulate a dedicated Aerospace Policy he explained.

We will make all necessary preparations for the smooth, succesful & safe conduct of #AeroIndia2021. Aero India 2021 will create a vibrant platform to collaborate with industry & realise PM @narendramodi's vision of achieving self-reliance in defence production. (2/2)@PMOIndia

Strategic Defence major PSUs like HAL, BEML and BEL are situated in Bengaluru. Karnataka is geographically well-positioned at the crux of AeroSpace and Defence eco-system which includes India’s 1st private Aerospace SEZ in Belagavi District of Karnataka; a thousand-acre Aerospace Park at Devanahalli adjacent to Kempegowda International Airport; MRO at Kempegowda International Airport; and a Defence Production Cluster near HAL Helicopter unit in Tumkur District. Multiple financial incentives have also been announced under the New Industrial Policy of Karnataka to create a favourable environment for the investors, he said.

Govt. of Karnataka is also providing a 1.5 million Dollar subsidy to anchor industries and special incentives for MRO and Regional Civil Aviation facilities. Karnataka in general and Bengaluru in specific are the most prominent destinations for Global Investors in the Aerospace and Defence sector.

The Chief Minister said that the best possible preparations and precautions are being taken for the smooth conduct of the event.

The defence minister Rajanath Singh, who also addressed the virtual meeting and said that Aero India 2021 aligns with India’s vision to be among the top five countries of the world in defence and aerospace industries with the active participation of public and private sector.

He said that India intends to strengthen the defence system for peace. India is one of the largest defence manufacturing sector. Due to the latest defence policy, we have enabled aerospace industries from design to production. 2021’s Aero India aims towards making India self-reliant in defence production. It is one of the major exhibition for aerospace and defence industries with a public air show.

He said that India has highly technically qualified human resources for developing defence manufacturing hub. Through the Aero India 2021, we intend to make India one among the five leading countries in Aircraft and spacecraft industry, he briefed.

The Aero India 2021 can also be utilized for Government to Government level discussions to express concerns and challenges encountered and also the defence industry and research organisations can exploit the opportunities: by participating in the event, he said.

The Defence Minister said that numerous Government reforms such as the increase in FDI to 74 pc through automatic routes. The defence acquisition procedure 2020, revised offset guidelines to promote investment in India for co-development and co-production and export promotion policy 2020 during the preceding pandemic months to steer the vision as also for ease of business.

Voters in favour of BJP despite criticism by Oppn: Kateel