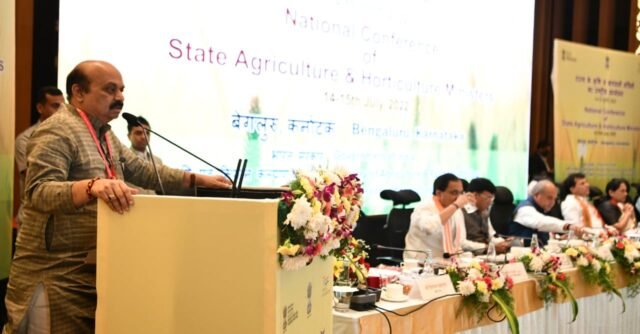 Pointing out the need for more investment in the agriculture sector, he said, “more farmer-centric policies from the union government are needed.” Bommai also announced for the first time in the country, that Karnataka is setting up ‘Ksheera Bank’ exclusively for dairy farmers to provide loans at low-interest rates for farmers.

“Apart from taking the economy ahead, agriculture provides food security for the country. India lacked food security with a population of 33 crore when the country attained independence. Now though we are a country of 130 crore people, we have attained food security. It has been made possible by the hard work of our farmers, farm scientists and the vision of our Prime Minister Modi,” Bommai said. Referring to the farm scenario in Karnataka, Bommai said, Karnataka has 10 Agro-climatic regions, as a result, the state achieved 10 per cent growth in agriculture even during the COVID-10 crisis. He stressed the need for digitization in the farm sector, Karnataka is at the forefront in this regard and digitised all its land records 2 decades ago. The land records software being used in the state could be utilised by other states too, he said.

He lauded the Watershed programme of the union government for reducing the aspect of soil erosion in agriculture. The ‘Bhoochetana’ programme introduced by former Chief Minister BS Yediyurappa was a great success in preserving the fertility of the soil. Our government has decided to reintroduce the programme, Bommai said.