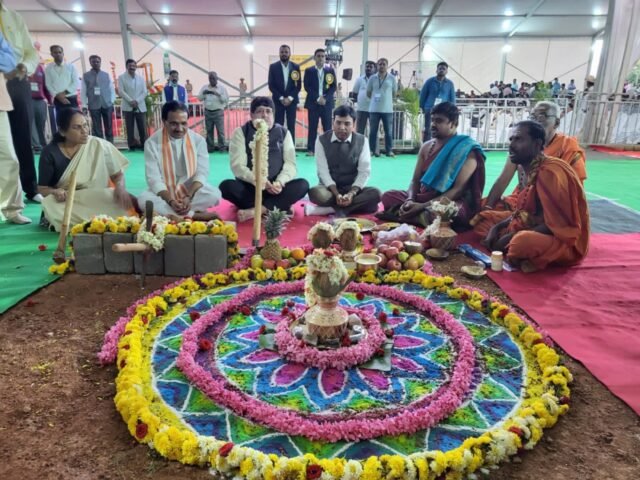 In a tweet, Mandaviya said, ”Making India Aatmanirbhar in Fertilizers! Laid the foundation stone of IFFCO Nano Urea Plant in Bengaluru, Karnataka in the presence of CM @BSBommai Ji. The plant will increase the supply of Nano Urea to farmers.” Highlighting the benefits of Nano Urea and how it will revolutionise the agriculture sector, he said Nano Urea will help protect the health of the soil and keep the environment safe while ensuring food for all.

Also, addressed the gathering on the occasion.

Highlighted the benefits of Nano Urea & how it will revolutionise the agriculture sector.

Nano Urea will help to protect the health of the soil & keep the environment safe while ensuring food for all. pic.twitter.com/1GBOll5vqk

Minister of State for Agriculture and Farmers’ Welfare Shobha Karandlaje were among those present at the event.

According to IFFCO, this will be South India’s first nano urea plant with an investment of around Rs 350 crore.

It said it has planned to set up another eight plants across the country with a capacity of 34 crore bottles (500 ml) per annum.

”We will complete this project within 15 months,” an IFFCO statement said.

On commissioning, this nano urea plant will produce nearly five crore bottles per annum for the farmers of Karnataka and South India which is equivalent to five crore bags (22.5 lakh MT) of conventional urea, it said.

IFFCO officials said a 500 ml bottle of nano urea (liquid) can effectively replace a 45 kg bag of urea. It has been priced 10 per cent lower than the conventional one bag of urea. Prime Minister Narendra Modi had inaugurated the world’s first nano urea plant in Gujarat.

IFFCO has produced 4.5 crore bottles at Kalol plant in Gujarat and marketed across the country which has replaced 4.5 crore bags of conventional urea.

IFFCO said its nano urea (liquid) has the potential to cut down the use of conventional urea, the most used Nitrogenous fertiliser, by 50 per cent or more.

Application of nano fertiliser is foliar in nature and spray of nano particles on the leaves result in high yield. Hence, soil does not get contaminated too. This reduces toxicity in soil and thus soil imbalance. Also, release rate and pattern of Nano fertiliser are precisely controlled.

Nano urea (liquid) is cheaper as compared to urea and also it reduces subsidy burden on the government considerably, IFFCO said. PTI

Karnataka HC allows recall of victim for cross-examination in POCSO case as she is...