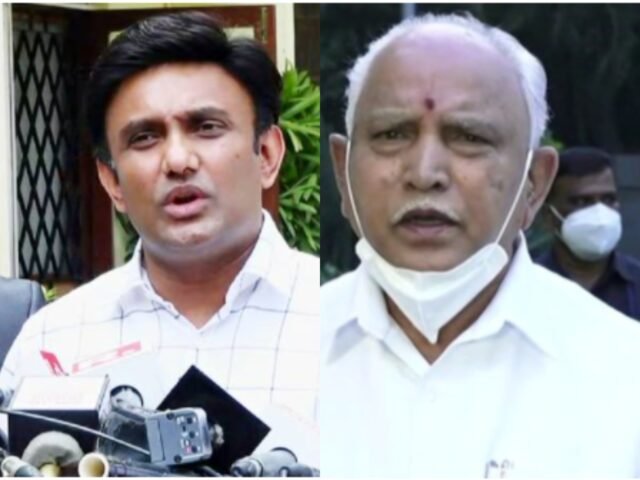 Dr Sudhakar says night curfew was recommended by experts, warns opposition it will be ‘responsible’ if Covid infections rise

The ‘curfew cat’, as they say, is out of the bag! Karnataka Health Minister Dr K Sudhakar’s strident defence of the government’s decision to impose a statewide night curfew – which turned into a farcical non-starter hours before it was supposed to come into effect on the night of December 24 – is a clear pointer to his role as ‘chief influencer’ in pushing Chief Minister BS Yediyurappa into making the initial curfew announcement on December 23. TheBengaluruLive  was well aware of his role in the curfew fiasco (see https://thebengalurulive.com/million-dose-q-who-misled-cm-on-flop-night-curfew/ ), but chose to let the ‘curfew cat’ come out on its own!

On December 22, even as reports of a new and more infectious strain of the coronavirus in the UK were causing public anxiety, the CM had stated that the government had no plans to impose a night curfew. Just a day later, on December 23, came his first flip-flop when he announced a statewide night curfew, the second flip-flop coming a few hours later when he amended the curfew date to December 24 night and the timings from 10 pm-6am to 11 pm-5 am.

The final 360-degree turn came on Thursday, December 24, when the CM’s office put out a statement withdrawing the curfew just six hours before it was to kick in.  There is no doubt that widespread opposition across the board, including from opposition political parties in Karnataka, and very likely a rap on the knuckles from the CM’s political bosses in New Delhi, made Yediyurappa reverse course on the curfew.  In fact, the CM’s own cabinet colleagues had serious reservations about the ‘effectiveness’ of a night curfew in containing the spread of the pandemic, and some of them even spoke their minds on the issue after the three-day farce came to an end.

On Friday, in an attempt at some belated damage-control,  Health Minister Sudhakar took the line of ‘offence being the best defence’. He told mediapersons that despite being aware that a night curfew would hit economic activity in the state, the government, keeping in mind the safety of its citizens, had decided to go ahead with the imposition of a night curfew. “Is it not the duty of the government to remind people about following the rules and guidelines in the current situation?” he asked rhetorically. Taking shelter under the umbrella of statistics, Sudhakar said that “this is the very government” that had raised the Covid recovery rate to 97.5 per cent and reduced the fatality rate to 1.22 per cent.

Continuing with his strident defence of the curfew decision, he referred to the UK lockdown and the ongoing night curfew in Germany. “Are they dumb? We have not taken a political decision… the Technical Advisory Committee was consulted before taking the decision,” Sudhakar said.

The decision on the 11 pm-onwards curfew timings was taken so that normal life would not be affected, he said, and added, “Almost all our festivals this year were celebrated in a simple way, but outrage was expressed only against this night curfew, as though it was necessary for youth to have fun or party during the new year.”

Shifting the onus onto the opposition, the Minister ‘warned’,  “I have seen comments of some opposition leaders. If something happens, they will be responsible.”

Meghana sits in mourning all night by husband Chiranjeevi’s body