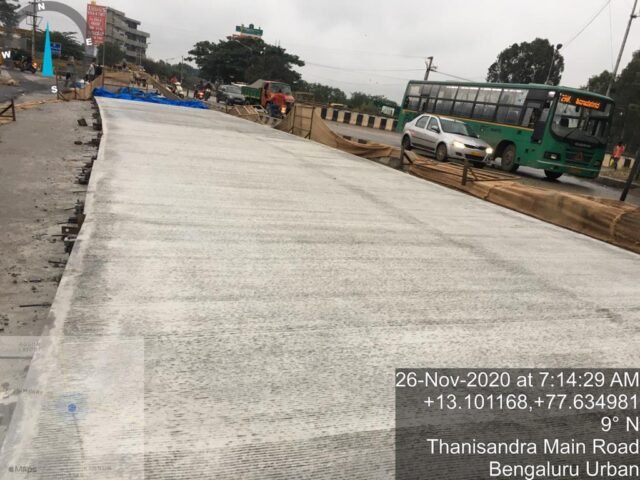 Thank next year’s Aero India show for providing the ‘impetus’ to a decade-old dream of having an alternative route to Kempegowda International Airport. The Thanisandra main road is all set to get a makeover at a cost of Rs 60 crore — the white-topping work on the 19-km stretch is scheduled for completion by February.

Ever since KIA opened its doors to flyers more than a decade ago, the state government had directed BBMP to develop the Thanisandra main road as an alternative route for travellers between the city and the airport. However, work on the project was held up for various reasons, including land acquisition/TDR issuance delays and lack of coordination with BWSSB for the remodelling of the underground water and sewage system.

Showing a renewed sense of purpose and urgency, BBMP has initiated the white-topping work of the road from the railway underpass to the Bagalur junction — 19 km on either side of the road. The work commenced on November 27 and traffic restrictions will be in place till at least January 10 next year.

“BBMP expects to complete the white-topping on either side of the road before the Aero India show commences in February. The improved motorable conditions will ease the traffic congestion, and people can travel hassle-free via this alternative road to reach the airport,” said BBMP’s Special Commissioner (Projects) Manoz Jain.

Sources said that BBMP Commissioner N Manjunatha Prasad has fixed responsibility on Manoz Jain for the execution of various white-topping projects, especially the Thanisandra main road. The Thanisandra project has gained momentum in the last 3 months after Jain coordinated with BWSSB, which was hitherto carrying out the UGD work at a snail’s pace.

“We have tried to use the maximum number of labourers to speed up this project on a war footing. Overall, around Rs 60 crore will be spent on white-topping of the 19-km stretch on either side, and the work is expected to be completed before the second week of January,” Jain said.

This will be a win-win outcome for visitors to the Aero India show too, as the stretch to be white-topped leads from the Yelahanka and Bagalur sides to the car parking area of the show — gate number 5 where a fire had broken out in 2019, tragically gutting around 300 vehicles.