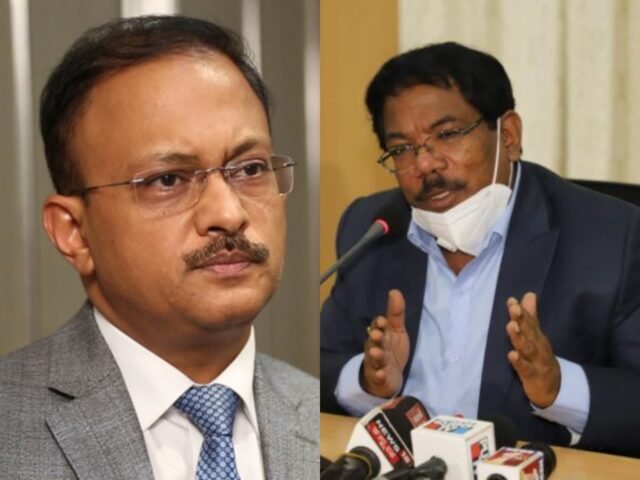 With the civic agency now being run by state government appointees, there is a fear that the administrator and the Commissioner may pull in different directions. Observers hope this will not happen and the ‘top 2’ will work in tandem for the benefit of all Bengalureans

With the people’s representatives out of the picture and bureaucrats now holding the reins of power in the corporation that runs Bengaluru city, there are already fears among perceptive observers over the administration of BBMP turning into a ego tug-of-war between the senior IAS officers tasked with running the show.

The term of the elected council ended on September 10 and, till the next council is elected, the state government appointed Gaurav Gupta (1990 IAS batch) as BBMP administrator.  That apart, it was only very recently that N Manjunatha Prasad (1994 IAS batch) was transferred as BBMP Commissioner in place of the earlier incumbent, BH Anil Kumar.

According to the bureaucratic grapevine,  the development is like a dream come true for Gaurav Gupta as he has eyed the post of BBMP Commissioner for at least a decade. In fact, it is at least on paper a step up as the BJP government has posted him as administrator – in other words, the captain of the band of officers that will be running the civic show. But this is where the grey area begins – between his overall leadership as administrator and the executive powers of BBMP Commissioner Manjunatha Prasad. Prasad is a BBMP veteran, having served as civic chief for 4 years since 2016 (he was transferred twice but remained in his post as the government couldn’t find a replacement).

The early signs of a possible power tussle are already there.  For example, East Bengaluru was battered by heavy rains on September 9 and the BBMP Commissioner on the same day and on September 11 undertook a thorough inspection of the affected areas, especially Manyata Tech Park and adjoining areas of Hebbal lake and Rachenahalli lake. Then, on September 12, virtually the same exercise was repeated by administrator Gaurav Gupta.

Observers say that when the Commissioner had spent several hours visiting the rain-hit areas, it was not at all necessary for the administrator to do a recce of the same areas with the same set of officers in tow  and – more confusingly – give them new directions.

On Friday evening, Prasad had inspected the Storm Water Drain at Manyata Tech Park and Jawaharlal Nehru Centre for Advanced Scientific Research at Jakkur, and had given specific directions to prevent overflowing of the SWD and consequent flooding. On Saturday morning, Gupta spent some hours at the same locations. Prasad did not accompany Gupta on Saturday.

Who has more powers…?

As per the KMC Act, section 100 (2), “Notwithstanding anything contained in this Act, on the appointment of an Administrator under this section, during the period of such appointment, the corporation, the standing committees of the corporation and the Mayor, the Deputy Mayor and other authorities other than the Commissioner, charged with carrying out the provisions of this Act or any other law, shall cease to exercise any powers and perform and discharge any duties or functions conferred or imposed on them by or under this Act or any other law, and all such powers shall be exercised and all such duties and functions shall be performed and discharged by the Administrator.”

In simple words, the BBMP administrator exercises the powers of all the standing committees, the Mayor and the Deputy Mayor.

However, as an executive authority the powers of the Commissioner remain the same as during the rule of elected representatives.

The Commissioner prepares the notes and proposals and places them before the administrator, just as he was sending proposals to various standing committees which were later placed before the council and then sent to the state government for a final nod.

Bhaskar tenure was the exception!

However, the grey area in the powers of the top two BBMP officers is accentuated by the precedent of 2015. The administrator then was senior IAS officer TM Vijay Bhaskar (currently the state’s Chief Secretary). His tenure was exceptional in that the then Commissioner, IAS officer G Kumar Naik, never tried to overrule his directives.

In fact, it was Kumar Naik’s ‘yours faithfully’ approach which helped Vijay Bhaskar acquire an image as a ‘development-oriented’ and ‘clean’ officer – one that later propelled him into the highest post of Chief Secretary. Bhaskar still reviews Bengaluru issues regularly via his chairmanship of the inter-department coordination committee comprising representatives of  BBMP, BWSSB, BESCOM, Bengaluru Metro and other departments.

As BBMP administrator, Bhaskar’s day used to begin with the morning mustering of poura karmikas, with top priority given to the daily garbage disposal. Later in the day, he would review revenues and expenditures of all departments and give specific orders to his team, which was then headed by Kumar Naik.

The Congress government led by Siddaramaiah had deputed  Vijay Bhaskar to clean up the image of BBMP along with Kumar Naik — both appointments were made the same day. But in the current scenario, Gaurav Gupta has been sent as administrator and the BJP government has retained N Manjunatha Prasad – a 4-year veteran who has been in total administrative command hitherto – as Commissioner.

In these circumstances, there is a legitimate fear that a power tussle could develop between the top 2 functionaries, and other IAS officers holding posts like Special Commissioner (in charge of Projects, Revenue, Solid Waste Management, Health and Welfare) might become ‘footballs’ between the conflicting directions of the administrator and the Commissioner.

One hopes that in the interests of nearly a crore of Bengalureans, such a scenario does not unfold and both administrator Gaurav Gupta and Commissioner N Manjunatha Prasad work in unison for the development of namma Bengaluru and the welfare of its tax-paying citizens.

Hanuman Chalisa, Suprabhata will be played in temples at 5 AM from Monday: Muthalik