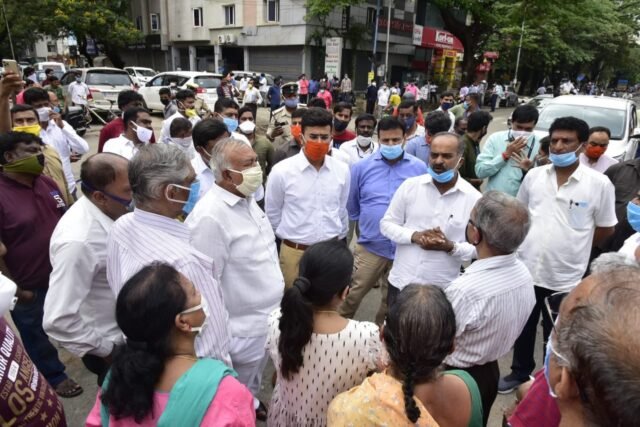 Bengaluru South MP Tejasvi Surya has directed BBMP and BWSSB officials to fast-track construction of a parallel drainage system, injection wells and desilting of the Bellandur Lake in low-lying areas of Koramangala to prevent inundation during rains.

A burst of rain on Wednesday morning threw life out of gear in Koramanagala, Ejipura and other nearby localities with water flooding homes, roads and drains. Springing into action immediately after receiving calls from citizens about the flooding, Surya called a joint meeting with BTM Layout MLA Ramalinga Reddy, Bengaluru Central MP PC Mohan, BWSSB Chairman Tushar Girinath and BBMP Chief Engineer BS Prahlad (SWD), Chief Engineer BR Muddaraju (South) at the Maharaja signal in Koramangala. Mayor Goutham Kumar, Deputy Mayor Mohan Raju and other local leaders were also present in the meeting. After listening to aggrieved citizens, the public representatives and officials sat down to chalk out solutions to the locality’s civic problems.

“While most parts of Bengaluru enjoyed the morning spell of rain in the middle of summer, citizens of Koramangala and Ejipura had a harrowing experience with water spurting into their homes and flooding their streets,” Surya said in a statement. (see video)

“This is a story we hear during every monsoon and every time we hear such a story, the officials provide a band-aid solution which solves the problem only temporarily. This time, on behalf of the aggrieved citizens, we demanded a permanent solution to stop further inundation of Koramangala and Ejipura.”

The group arrived at a three-part solution to the problem.

The BWSSB will complete the development of a parallel drainage system to take the load off the main drain line and prevent rainwater from flowing into the sewage line. The BWSSB will have to carefully tackle a power line of KPTCL. But the water supply board has assured the representatives that it will complete the work in four months.

Meanwhile, BBMP will construct injection wells at 4-5 pre-identified low-lying spots in Koramangala. The injection wells will help the water flow into the aquifers below and also recharge the groundwater wells.  BBMP will also install filters to prevent the contamination of the water flowing into the groundwater table. The Corporation has previously completed an injection well project near Le Meridien Hotel at Trinity Circle and will immediately undertake a feasibility study to develop the same in Koramangala.

To give impetus to the entire solution,  BBMP will desilt various parts of Bellandur Lake and start the work soon. “The stormwater drain here starts from the City Market and passes through various localities, including Koramangala, before flowing into Bellandur Lake,” Bengaluru Central MP Mohan said. “Sometimes, the sewage water also mixes with the rain water and flows through the stormwater drain, leading to the formation of silt at Bellandur Lake. I understand that the work orders to desilt the lake have already been issued. Owing to the coronavirus pandemic, the work did not take off. However, we’ll immediately instruct the officials concerned to start the desilting work at Bellandur Lake now.” The desilting work will also take up to 4 months.

Officials of  BBMP and BWSSB will conduct feasibility studies for their individual projects and start these expeditiously. “We’ve requested that the work be completed before the next time it pours like Wednesday in Bengaluru. We do not want the citizens to be inconvenienced again,” added Surya.